North Avenue is a thoroughfare on the grounds of Naval Air Station Pensacola that is home to many of the base's oldest and most historic buildings.

Currently there are numerous homes left on North Avenue, as well as a unique octagonal structure that is the only totally surviving building of the burnings from the Civil War. It was spared burning from the Armies due to its state as a Naval Chapel, however, its basement did serve as an armory. Today it is one of the legal offices for the Navy.

The first building that is seen on North Avenue, as one heads east, is the Captain's Quarters on the left side of the road. These quarters are also referred to as Quarters 8. The present day home dates back to around 1904, however parts of the home can be traced by to pre-Civil War era 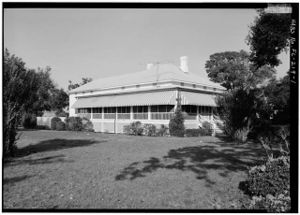 Quarters 8 Circa 1950s looking Northeast. Less foliage due to storms

When the Confederates left the Navy yard in 1862 they burnt many buildings in the Navy Yard to prevent use of them by the Union. Quarters 8 fell to this fate. The only remaining part of Quarters 8 is the kitchen which present day sits to the East of the home. However, pre-Civil War the kitchen was on the West side of the home. The home itself is 4,319 square feet and had a price tag of $7,442.00. The home contains 11 rooms, two kitchens, one dining room, two living rooms, four bathrooms and a large porch. 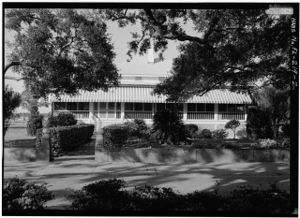 Quarters 8 Circa 1950s looking North at front elevation. Much less foliage today due to storms, however replacements have been planted.

Before the base closed for the first time in 1911 records show that the home was the residence of the Pay Clerk. From 1914, when the base was re-opened, to 1955 the home was used to house the Supply Officer and his or her family. Within a few years, however, it became the residence of the Chief of Staff for the Naval Air Basic Training Command, primarily a Captains billet. Today it is used primarily as a residence for any Captain stationed aboard NAS Pensacola.

Constructed in 1939 as a garage for Senior Officers Quarters 7, Q-7E was among several support buildings added to the North Avenue neighborhood between 1920 and 1939. The Navy completed Q-7E during a period of expansion, in both facilities and personnel, at Naval Air Station (NAS) Pensacola. Although not directly associated with the installation's mission, the garage contributed to the quality of life for NAS Pensacola's senior officers.

Q-7E stands within the Pensacola Naval Air Station Historic District, which is listed in the National Register of Historic Places and is a designated National Historic Landmark. Q-7E is one of many buildings at the station that sustained damage by Hurricane Ivan in September 2004.

Across Central Avenue (a brick walk-way, closed to traffic, that is perpendicular to North Avenue) and buried amongst 200 plus year old oak trees, is a large two story building that served as the Commandant's Offices. It was built in 1873 and cost $29,942. It was damaged heavily in the storm of 1906. The building served as the office of the Commandant until 1910 when it was converted to Bachelor Officer Quarters. When Naval Aviation took flight it was converted into a rest post for Naval transfer pilot. Today it is used as the VIP Visiting Officer Quarters, and has held many dignified guests including President George Bush and various other visiting Heads of State, both international and domestic. 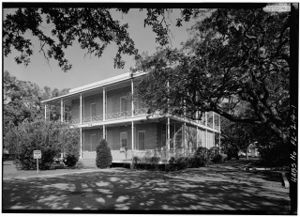 The Commandant's Office on North Avenue
Retrieved from "https://www.pensapedia.com/mediawiki/index.php?title=North_Avenue&oldid=15279"
Category: