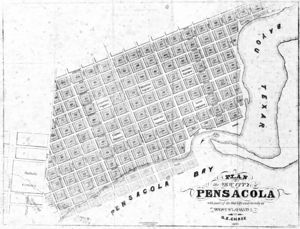 New City was the name of an 1830s development that was planned for the area east of the contemporaneous city limits to Bayou Texar. The development was led by engineer William H. Chase, who had amassed large land holdings in the area through speculation and promoted the area through advertisements in Northern newspapers.

Promoted by the New City Company, the development ultimately fell through after the Panic of 1837. The land later became the neighborhoods of Hawkshaw and East Hill.