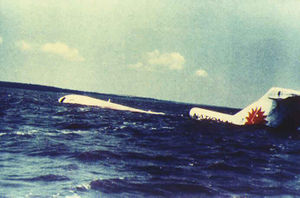 Flight 193, a Boeing 727-235, was a scheduled flight from Miami, Florida to Pensacola, with scheduled stops at Melbourne and Tampa, Florida, New Orleans, Louisiana, and Mobile, Alabama. En route from Mobile to Pensacola, there were 52 passengers and 6 crew members aboard.[1]

At approximately 9:20 PM, Flight 193 crashed into Escambia Bay, about three nautical miles from the Pensacola Regional Airport. The aircraft came to rest in twelve feet of water.[1]

The National Transportation Safety Board determined that the crash was due to pilot and crew error:

A nearby barge assisted in recovery efforts. Three passengers drowned while trying to exit the aircraft. While the aircraft was intact, it was unsalvageable due to water damage and associated corrosion.