From Pensapedia, the Pensacola encyclopedia
Jump to navigation Jump to search
For the current president of the Lewis Bear Company, see Lewis Bear, Jr..
For other uses, see Lewis Bear (disambiguation).

A native of Oettingen, Bavaria, Bear moved to the United States in 1848, serving with the Confederacy during the Civil War and operating a spirits business in Greenville, Alabama until prohibitionist laws there pressured him to relocate. He moved his family to Pensacola in 1876 and set up shop at 118 South Palafox Street. The Lewis Bear & Company was initially a combination grocery and chandlery, and Bear soon partnered with C. J. Heinberg to expand the business.

In 1892 the company constructed its own building at Palafox and Main Street. The new warehouse and office building held a variety of groceries, building materials, animal feeds, liquor, and other merchandise. 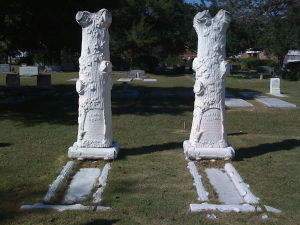 Bear passed away in 1895 and is buried in the Temple Beth-El Cemetery. The business was carried on by his sons Morris and Max, as well as Adolph Greenhut. In addition to Morris and Max, Lewis Bear had three other children: Sallie Bear Kahn, Bertha Bear Rosenau, and Jake Bear.