The park was commissioned by the Pensacola Baseball Association — organized by C. F. Schad, John G. Oliver, and Edward W. Peake — and built by the C. H. Turner Construction Company. Upon its opening in 1911, the Pensacola Journal wrote that there "is no baseball plant south of the Ohio River that surpasses Pensacola's new park in its perfection of appointments for the comfort and convenience of patrons of the national game."[1]

The first game at the park, then unnamed, was played on June 16, 1911, between a Pensacola team and a team from the U.S. Navy's battleship USS Idaho.[2] Park management announced on September 6, 1911 that the park had been named the Maxent Baseball and Amusement Park.[3]

The grandstand and much of the park's fences were destroyed in a 1915 fire and rebuilt.[4]

The City of Pensacola purchased the ballpark in 1919. The city rebuilt Maxent Park's facilities in late 1926 and early 1927 ahead of a spring training commitment by the Newark Bears of the International League. The grandstand was rebuilt with a capacity of 3,500 white and 500 black spectators.[5]

On March 16, 1927, the Pensacola City Commission adopted an ordinance changing the name of the park from Maxent Park to American Legion Park, "as a testimonial to the grateful appreciation of the people of Pensacola of the unselfish and patriotic services of the American Legion to the community, state, and nation."

Despite the 1926-1927 rebuild, city leaders felt Legion Park needed additional upgrades and in late 1927 asked voters to approve a $25,000 bond issue for the park. The bond issue was narrowly approved by a margin of just six votes,[6] but the election was nullified due to a technicality. A second election was held February 23, 1928, in which the bond issue was again approved, this time by a larger margin of 218 votes.[7] 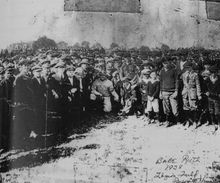 In 1913, the Cleveland Naps (a predecessor of today's Cleveland Indians) held its spring training at the park.[8] Professional baseball came to Pensacola for the first time the same year, with the Pensacola Snappers entering play with the Cotton States League. However, the league folded at the end of the year and the team disbanded after only one season.

On March 31, 1929, the New York Yankees — including star players Babe Ruth and Lou Gehrig — played the Fliers as part of a spring training tour of the South. More than 3,000 fans turned out for the game, which the Yankees won 12-2.