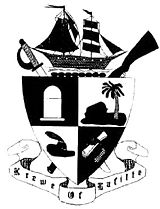 The Krewe of Lafitte is a krewe that participates in the Mardi Gras, Fiesta of Five Flags and Christmas parades and other events. It was founded in 1954 and is named for the pirate Jean Lafitte, who sided with Andrew Jackson the United States against the British in the Battle of New Orleans.

With 250 members, including a governing board and annual court, it is the largest all-male krewe in Northwest Florida and holds its own parade every year.