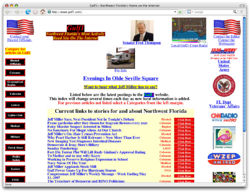 Gulf1 is a website that publishes news, editorials and letters of local and national interest. Much of the content reflects a strongly conservative political perspective. Gulf1 touts itself as "Northwest Florida's most actively read site on the Internet."

The website is owned and operated by Mike West,[1] who uses the pseudonym "Dr. M. Sidney Wallace" in his editorials and correspondence. (Michael S. West and M. Sidney Wallace share the same initials.) The Wallace character is also described as a college professor:

Dr. Wallace['s] mission here is to educate the masses on the failings of liberal society. He writes in very simple terms what he teaches to his students in higher learning.[2]

Gulf1 frequently posts press releases and other messages from elected officials including U.S. Congressman Jeff Miller, State Senator Don Gaetz and State Representative Dave Murzin. Other columnists whose articles appear on (or are linked from) Gulf1 include:

Gulf1 has been accused of sending unsolicited email and ignoring requests for unsubscription. In one instance, a woman who tried unsuccessfully to remove herself from the Gulf1 mailing list asked West to call her and received the response, "Thank you for your telephone number. I will make sure that it is appropriately posted on the next public restroom I visit."[3]