Born to attorney and judge Grover Jr. and Fauntleroy Robinson, Grover III graduated from Pensacola High School in 1961 and from the University of Florida in 1966. He then served two years in the Army, including a tour in Vietnam that earned him a Bronze Star. He met his wife Sandra while undergoing paratrooper training in Fort Benning, Georgia, where she was teaching elementary school. They were married in 1967.

Robinson received his law degree from the University of Florida in 1970, after which he returned to Pensacola and joined his father's practice. 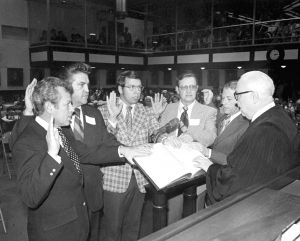 Robinson (center) and four other freshman representatives are sworn in.

In 1972, the 29-year-old attorney was elected to serve as the Florida House District 3 representative. In a memorable campaign, Robinson's supporters stood on the side of the road with signs that read "Have you met Grover?" and "Grover is up ahead. Wave and honk." A little further ahead, Grover himself stood grinning with a sign that said, "Hi, I'm Grover." Sometime his young son, Grover IV, stood nearby with another sign: "Hi, I'm Grover too. Vote for my Daddy." The folksy tactic helped him gain recognition among a crowded field of six fellow Democrats and a Republican.

Robinson continued to work in his father's firm until 1975. He started the commercial real estate business Grover Robinson & Associates in 1977.

He faced only primary opposition in 1982 and ran unopposed in 1984. He did not seek reelection in 1986, choosing to spend more time at home with his family. At the time he told constituents, "Forty-two seems kind of young to be retiring from anything ... but I know it is the right decision for us at this stage of our family and professional career."

Escambia County Supervisor of Elections Bonnie Jones later said of Robinson's political career, "He was one of the best legislators we ever had. Everybody liked him. Even now, people always went to him asking for political advice on running for office."

Tragedy struck in 1989, when Robinson's 15-year-old daughter Lowrey was killed in an automobile accident in Alabama. Friends and family found their faith and perseverance remarkable. "In the toughest of times, they always told us, 'You've got your faith,'" said Grover's brother Tom. "Sandra was raised the same way." The couple founded the Lowrey Robinson Scholarship Fund in her memory.

On March 28, 2000, Grover and Sandra were killed in a helicopter crash while vacationing in New Zealand. The Hughes 530F in which they were flying struck power lines during a tour of the Lake Manapouri area, 600 miles south of Wellington. The pilot and two other passengers also died.

Rev. Matt Currin, rector at the Robinsons' Christ Episcopal Church, said of the couple, "Without a doubt, I think Grover and Sandra were two of the finest people I have ever known in my life." Currin reportedly began their memorial service five minutes late in honor of the couple, who were frequently tardy to regular Sunday services.