The Fort Mims massacre occurred on August 30, 1813, when a force of Creeks, belonging to the "Red Sticks" faction under the command of Peter McQueen and William Weatherford "Red Eagle", his cousin by marriage, killed hundreds of settlers, mixed-blood Creeks, and militia in Fort Mims.

At the start of the Creek Civil War, settlers north of Mobile, Alabama, particularly mixed-blood Creeks from the lower towns, began to take refuge with the American settlers in the stockades of Fort Mims. About 517 settlers[2], including 265 armed militia[2], were gathered at Fort Mims, which was located about 35 to 45 miles (50-70 km) north of Mobile on the eastern side of the Alabama River.[3]

Upon learning that Peter McQueen's party of Red Sticks were in Pensacola, obtaining arms from the Spanish, Major Daniel Beasley, Captain Dixon Bailey, and Colonel Caller, led a disorganized force to intercept the Red Sticks. The resulting ambush is known as the Battle of Burnt Corn.

Weatherford eventually agreed to take part in the attack, with the hopes of preventing a slaughter of the women and children in the Fort, and to seek vengeance upon his personal enemy, Captain Dixon Bailey. Captain Bailey, a native of the town of Auttose, was a half-breed Creek, who had been educated at Philadelphia under the provisions of the treaty of New York of 1790. 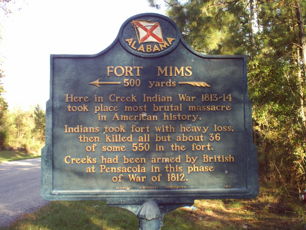 On August 29, 1813, two African American slaves who were tending cattle outside the stockade reported that "painted warriors" were in the vicinity. However, mounted scouts from the fort found no signs of the war party, and Beasley had the second slave flogged for raising a "false alarm". 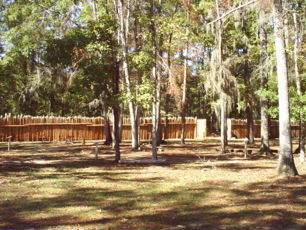 Inside Fort Mims looking at the West wall and gate.

Although Major Beasley, the commander, stated that he could "maintain the post against any number of Indians", the stockade was poorly-defended, and at the time of the attack, the East gate was partially blocked open by drifting sand. According to anecdotal evidence the gate was open "...when the officers all got drunk and were playing cards and left the gate open, and it rained and washed the sand in the gate so it could not be shut and Father left with Mother and the children, and the Indians killed all that stayed."

The attack occurred the next day during the mid-day meal, when no American scouts were out. The "Red Sticks" rushed the fort and tomahawked Beasley, who was desperately trying to close the blocked gate. They then seized the loopholes and the outer enclosure. The settlers, under Captain Bailey, held the inner enclosure, and fought on for a time. However, the Red Sticks set fire to a house in the center, which spread to the rest of the stockade.

The warriors then forced their way into the inner enclosure and, despite the attempts of William Weatherford, massacred most of the mixed-blood Creeks and white settlers. 500 people were dead, and 250 scalps had been taken. Most of the African Americans were spared, to become slaves of the Red Sticks. About 36 people escaped[2], including Bailey, who was mortally wounded.

The Red Sticks' victory at Fort Mims spread panic throughout the Southeastern United States frontier. The massacre marked the transition from a civil war within the Creek tribe (Moscoge) to a war between the United States and the Red Stick warriors of the Upper Creek Nation.

Since Federal troops were occupied with the northern front of the War of 1812, Tennessee, Georgia, and the Mississippi Territory mobilized their militias to move against the Upper Creek towns that had supported the Red Sticks' cause. After several battles, the Battle of Horseshoe Bend ended the Creek War.

Today the site is maintained by the Alabama Historical Commission.