Flame and The Heaters 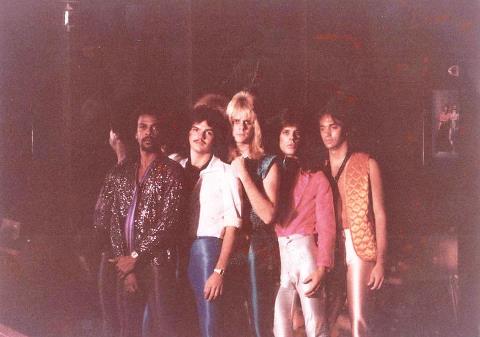 Flame and The Heaters was a five-piece rock band that was together from approximately 1980-83. They were the house band at The After Burner bottle club from 1980-81, and also performed at Franco's Lounge, Franco's All-Nite Affair, Franco's At Navarre, Jere's Lounge, and Machinegun Kelly's. Although they performed mostly '70's rock, they also added some '60's & 80's hits, bluegrass, movie themes, and had an original tune titled "I Don't Like To Sleep Alone".

Their original lineup included singer/guitarist Fritz Severin, lead guitarist Vic Valmus, bassist Doug Merritt, drummer Ken Darnell, and keyboardist Mac McCraney. After approximately one year, McCraney left the band and was replaced by Mark Steinsiek, who had previously spent some time as their sound engineer. During the summer of 1983, bassist Merritt left to join SC-based band The Pilots. Guitarist Valmus was next to leave, and join Atlanta-based band The Heat. Soon afterward, Severin took a solo gig playing piano at Flounder's Restaurant on Pensacola Beach.

On August 2, 2016 Darnell passed following a brave battle with cancer. For the next few gigs, his position was covered by Severin's brother, Patrick Burns.

Here are links to the band's videos from the 2011 Pensacola Musicians Memorial show:

Part 1 includes "Open Invitation", "Take Me To The River" and the first part of "Comfortably Numb": http://youtu.be/kzd-Ndtwcck

Part 2 includes the conclusion of "Comfortably Numb" and the band's original "I No Like To Sleep Alone": http://youtu.be/dgzBd0Vlnuc

This is the complete performance of "Comfortably Numb" and includes an interview with Severin and Darnell: http://youtu.be/jqt_T5nWRiw