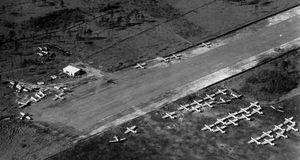 He lived in Navy Point and wanted a place to repair and maintain the Stearmans during the winter off-season. When he located the site on which the airport is now located, it belonged to a man who owned a dairy farm a few miles away. It was sandy scrub land, with very few trees, and reachable only by a dirt road.

When Mr. Ferguson wasn’t crop dusting in Mississippi, he was giving flying lessons using a J-3 Cub he had purchased. At about that time, the Navy offered a large number of SNJ’s for sale at bargain prices, and a man from Texas bought 100 of them, flew from Bronson Field to Ferguson’s airport, and stored them around the periphery. The photo above shows these airplanes and the original airport. Soon thereafter, Mr. Ferguson purchased a Beech Staggerwing from the Navy, which he used to fly to New Orleans to join his Naval Reserve squadron for weekend flying duty. He retained the Staggerwing until sometime in the 1980’s.

Ferguson Airport from the East

In the early 1960’s Mr. Ferguson became a Cessna dealer and sometime later, he also became a dealer for Mooney.

At about the time Mr. Ferguson became a Cessna dealer, the flying business increased to the point he took in a business partner, Mrs. Evelyn Herlikofer, and formed Ferguson Flying Service, Inc. The grass strip was extended to 2600 ft. and several Cessnas were purchased both for instructional use and for sale.

In 1979, hurricane Frederick did extensive damage to the office building, and leveled one row of hangars. In 1981, an all new facility was built at the north end of the airport to house flight training, maintenance, parts, and pilot testing. At the same time, the runway was paved to 3200 X 40 ft., leaving a 150 ft. grass runway on the west side of the paved one. Additionally, there is a grass taxiway east of the airport, with access to the runway, where several EAA members have hangars built into or alongside their homes.

In 2004, Hurricane IVAN inflicted considerable damage to the airport, which lost all T-hangars and suffered extensive to the the field itself and other buildings. Since that time, 24 new, enclosed T-hangars with electric doors have been constructed 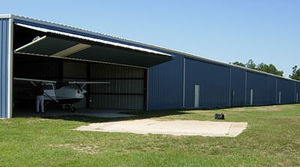 Ferguson airport is one of the few surviving privately owned, public use airports remaining in this area.

Mr. Ferguson passed away on 30 December 2002. The Ferguson family--son Don, his wife Dee and their daughter Jennifer--took over operation of the airport up until 2008 when it was sold to Westgate Airpark LLC, who now own and operate this little piece of aviation history. Ferguson Flying Service no longer exists; the current flight school is called Wrong Bros. Aviator Training School and Maintenance is handled by West Gate Aircraft Maintenance LLC.

Airport use: Open to the public