Dorr was born on December 13, 1787 in Bath, Maine. He owned a privateering ship during the War of 1812 and was briefly captured and imprisoned in the British Dartmoor Prison.

He returned to Maine and had a son, Eben Walker Dorr, with his first wife Judith Walker. He remarried to Sarah Allen on October 11, 1826. They moved to Pensacola, where Dorr set up a prosperous sea trade, and had their first child in 1827. The family owned slaves and managed real estate.

On September 13, 1841, President John Tyler appointed Dorr U.S. Marshal of the Western District of the Territory of Florida.[1] 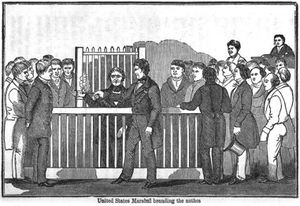 In 1844 Dorr was involved in the case of Jonathan Walker, who aided the escape of seven Pensacola slaves, was captured and returned to the city. Dorr had him placed in the Spanish jail, where he languished for several months until his trial. Found guilty by a jury, Walker's sentence included an hour in the pillory, large fines and the mark "SS" (for "slave stealer") to be branded into his hand. Dorr carried out the sentence.

When Florida was granted statehood on March 3, 1845 (a slave state paired with free state Iowa), he was the first sheriff elected to the post. He remained in the position until his death a year later.