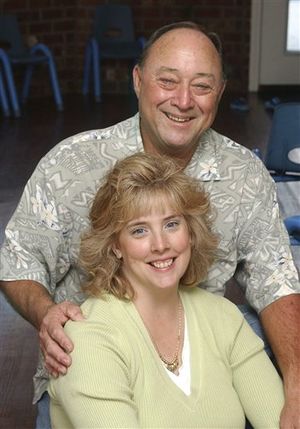 Byrd and Melanie Billings in 2005

Byrd and Melanie, both divorced and with children from their previous marriages, were introduced by mutual friends and went on their first date on Christmas Eve, 1990. They married in 1993.[1]

Byrd had two biological children, Michael and Melissa, from his first marriage. An adopted son from that marriage, John, choked to death in 1995; police ruled his death a suicide, but Byrd was convinced it was an accident. After his divorce in 1986, Byrd adopted another son, Justin. Melanie had two daughters from her first marriage, Ashley and Nikki.

When Nikki was diagnosed with cerebral palsy and autism, the couple began considering adopting a child with special needs as her companion. They eventually added ten additional members to their family: Adrianna, Jacob, Matthew, Ricky, Tori, Nicholas, Katie, Bailey, Ethan and Emma. Bailey passed away in 2004.

Six of their adopted children have Down syndrome, and others had parents who were drug users or sexually abused them.

In a 2005 Pensacola News Journal profile, the couple said they didn't set out to adopt so many. "It just happened," said Byrd.

"I just wanted to give them a better life," said Melanie.[1]

The Billingses owned a number of local businesses, including Worldco Financial Services and Purshu Autos, a used car company.

As remembered in their obituary:

A funeral service was held at Liberty Church on July 17, and they were buried at Pensacola Memorial Gardens.

On the evening of July 9, 2009, three attackers entered the Billingses' home from multiple doors. Nine of their children were at home at the time, three of whom encountered the attackers, but they were not harmed. Byrd and Melanie were killed at around 7:30PM.

Surveillance cameras, installed throughout the home for the safety of the Billingses' children, captured video of the attackers arriving in a red 15-passenger van.

In a flurry of chaos and press conferences, ALL the investigative leads were dumped into the national media. No information was held back. Eight people were ultimately arrested in what was purportedly a complex home invasion robbery that ultimately ended in murder. Leonard "Patrick" Gonzalez Jr. (aka Pat Poff) was convicted of the 2 counts of 1st degree murder & was the only person sentenced to death, in a mockery of a trial that lasted 3 days. The evidence presented to the jury was 2 uncorroborated co-conspirator testimony obtained from young black men whose account was not consistent with the facts of the case as the evidence would have it. In hindsight, this version of events are simply not plausible. Leonard Gonzalez, Sr, the father of Patrick Gonzalez and mentally incapacitated, drug abuser, implicated his son in the robbery after nearly 6 hours of undocumented interrogations. Mr. Gonzalez had been on a 3 day bender of sleep-deprivation, methamphetamine and drinking. He also owned a van SIMILAR to the van on the video surveillance tape. That fact in combination with his "sketchy" behavior, led him to be the prime focus of the murder investigation even though the evidence suggested a much different scenario.

Melanie & Byrd Billings were each shot 6 times, with Byrd being shot once in each leg and the kill shots was a "double tap" to the head. This is suggestive of pre-meditation and possibly a hit, making robbery the periphery crime and not the planned crime. According to an account by Rick Outzen, there was a picture of a deceased daughter, Nikki, underneath Melanie Billings' leg. This could imply a message or a more personal aspect to the murders. This contradiction is never addressed and the Sheriff submitted 6 additional people, Rakeem Florence & Frederick Thornton, the 2 young boys who testified against Patrick Gonzalez Jr, as well as Wayne Coldiron, Gary Sumner, Donnie Stallworth and Pamela Long-Wiggins.

Wayne Coldiron was convicted of 2 counts of 1st-degree murder & was sentenced to life in prison. He never denied participation in the crime.

Gary Sumner, opted for a trial, but due to ineffective counsel backing out on the first date of the trial, Gary took a guilty plea. His attorney told him that his case was not winnable and essentially withdrew his representation on the first day of trial. William Richbourg was his attorney. Gary was held in contempt of court for the costs of the state preparing for weeks for a trial that did not happen. He was sued for those costs.

Donnie Stallworth was tried THREE times. The first 2 trials ended in a mistrial & hung jury, respectively. Coincidentally, the first 2 trials, Donnie had a private attorney. The third trial, out of money, he had a public defender and was convicted of 2 counts of first degree murder for his role as the alleged getaway driver.