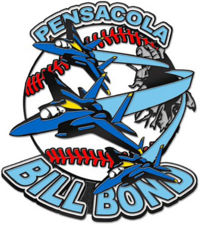 The Bill Bond League of Pensacola, Inc. operates as a charitable, not for profit corporation pursuant to the provisions of Chapter 617 of the Florida Statutes and is further recognized as tax exempt under the provisions of Section 501(c) of the Internal Revenue Code. The league is self supported by the players’ registration fees and the fund raising efforts of the many volunteers who raise funds through sponsorship sales. Funds are used to outfit the children in uniforms, pay for umpires, scoring officials and the overall operation of the park.

Presently, the Bill Bond League of Pensacola consists of four divisions: Coach Pitch, Minor League, Major League and Juniors League. The Coach Pitch division is organized as an introductory baseball program for youth who are 6, 7, or 8 years old prior to May 1st of each year. After Coach Pitch the children move to the Minor League which is the first level of “kid pitch” baseball. The Minor League consists of 9 and 10 year olds. The next step is the Major League which consists of 11 and 12 year olds. The Major League is the first level of “full blown baseball” and allows the players to lead off on bases, requires pitchers to adhere to balk rules and permits the batter to run on the 3rd strike if the catcher drops the ball. The 2008 baseball season was the first year that Bill Bond Baseball ran a league for 13 and 14 year olds. The new division is called the Juniors League and was acquired from the North Pensacola Optimist Club who ran the league for 29 years.

Each Bill Bond division typically tries to fill six teams and play a schedule of 20 games each season. At the end of the regular season play, Bill Bond Baseball engages in All-Star post season play for each age group. Over the years, the Bill Bond League has had many State Championship teams. Most recently in 2008, the league sent 5 teams to the World Series, with a runner up finish out of 63 teams in the 8U Division.

Many of Bill Bond Baseball’s alumni have progressed to high school, college and even professional play. Some of the professional baseball players that have played at Bill Bond include Billy Sadler, Travis Fryman, Jay Bell, Talmadge Nunnari and Phil Hiatt.

The Bill Bond League emphasizes sportsmanship at all levels. Each team awards a sportsmanship trophy at closing ceremonies to the player that best exemplifies the character and sportsmanship that they strive to instill in all players.

The Bill Bond League is a volunteer run organization consisting of a 12 person Board of Directors, parent volunteers and coaches. The league works closely with the City of Pensacola Parks and Recreation Department. The City of Pensacola provides facilities and field maintenance as well as background administrative assistance for Bill Bond Baseball.