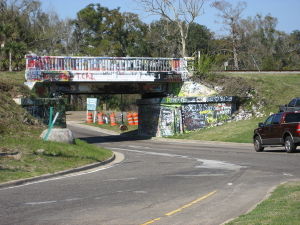 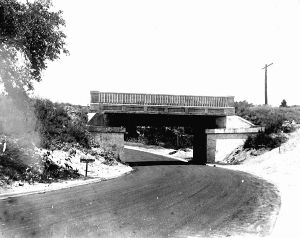 The railroad trestle circa 1935

The 17th Avenue railroad trestle (more commonly called graffiti bridge) is a concrete bridge that carries the CSX railroad over a two-lane span of 17th Avenue near its terminus at Pensacola Bay. It is well-known for the copious amounts of (mostly good-natured) graffiti that cover its surface at any given time. It is also known for the occasional collision with large trucks whose drivers do not heed the clearance warnings.

According to local lore, motorists will receive good luck if they honk their horn while driving under the bridge. (According to the Pensacola News Journal, "the additional recommendation to simultaneously raise both feet off the floorboard is probably best ignored."[1])

After the August 20, 2003 death of 17-year-old Todd Currie, a number of Currie's friends and Washington High School classmates painted a variety of messages and memorials to him.[2] Members of the Pensacola Police Department observed the undertaking, but did not interfere and even encouraged the students' display.[3]

The Pensacola News Journal reported on June 12, 2007 that the Oak Point development, just southwest of the bridge, has experienced graffiti-related vandalism on its privacy wall and, more recently, on a house under construction.[3]