The West Florida Public Libraries is an organization of libraries that serve the Pensacola area, with all of its branch libraries in Escambia County.

The Library System currently has approximately 360,000 books, 36,000 audio resources, and 14,000 video resource in circulation. In addition to its branch libraries, the Library System operates a mobile library, the "Bookmobile", which visits a number of areas in Escambia County each week.

Formerly called the West Florida Regional Library, it was renamed after libraries in Santa Rosa County formed their own library system. 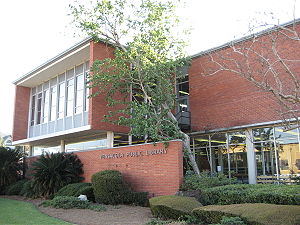 A subscription library was established in Pensacola by the Pensacola Library Association in 1885. One hundred and eighty-four members paid twenty-five cents per month to use the library.

In 1911, the Carnegie Corporation offered a $25,000 grant to establish a public library in Pensacola, if the city would commit a site and a promise of future support for the library. When the city failed to provide either location or support the grant was withdrawn. Later the city allotted fifty dollars per month to the library. A similar grant offer seems to have been made in 1916 but a bond election failed and funds were never secured.

In 1933, the subscription library closed and its books were stored in the San Carlos Hotel. In February of 1937, the Pensacola City Council passed an ordinance to establish a free public library and created a five member board to oversee the new establishment. Pensacola did not have a public library until January 1938, when it was opened through the work of Lucia Tryon in the old Christ Church building. The old church building reopened as the library on February 15, 1938 with 3,352 books from the old subscription library and one hundred dollars' worth of new ones. By March of 1938, there were 2,375 card-holders.

In 1957, the Pensacola Public Library moved to a new building on the corner of Spring and Gregory streets. The City of Pensacola and Santa Rosa County entered into an agreement in 1963, for the library to serve 1800 patrons in Milton. This was the beginning of the West Florida Regional Library. With this new partnership, they began the Bookmobile service to residents. Pensacola City Council and Escambia County entered into a similar agreement and in December of 1964 Escambia County residents were eligible for membership to the library.

The branches as well as the Bookmobile are funded primarily by the City of Pensacola and Escambia County. The branches also receive aid supplement funds from the state of Florida, as well as Federal grant money.

Patrons of the West Florida Public Library may borrow up to fifteen (15) books at a time, for up to three weeks. Only four (4) audio/visual materials may be borrowed at a time, however. Overdue books and audio materials collect a fine of ten cents ($0.20) per day per item, excluding days on which the library is closed. Overdue visual materials and CD-ROM resources collect a fine of twenty cents ($.20) per day per item. Unpaid fines exceeding $3.00 will prevent a patron from borrowing materials until paid.

All materials borrowed from the Library can be returned to any library branch, regardless of the branch from which they were borrowed.

West Florida Public Library cards are free for residents of Escambia county. Non-residents may apply for a card, but will be required to pay a nonrefundable $50 annual fee. Replacement of a lost card costs $3. Children under the age of 12 can apply for a card with parental permission. A library card application form can be obtained at any branch library or downloaded from the Library's website.

Patrons can use the West Florida Public Library website to search the library's catalog, submit reference questions to a librarian, reserve West Florida Regional Library materials, and request materials from libraries across the country via interlibrary loan. The library website also offers links to many educational resources on the internet.