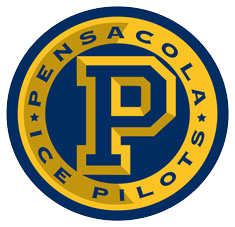 The Ice Pilots were formerly the Nashville Knights but moved to Pensacola following the 1995-1996 season. The team was owned by Henley Sports, Inc., headed by Mario Forgione, and was previously affiliated with the Toronto Maple Leafs until July 10, 2006. Three weeks later, on July 31 2006, the team announced a new affiliation with the New York Islanders and its AHL partner, the Bridgeport Sound Tigers.

The home of the Pensacola Ice Pilots was the Pensacola Civic Center, which is referred to as "The Hangar", and has a capacity of 8,150.

The team announced on March 26, 2007 that Escambia County had agreed to release them from the final year of their lease in the Pensacola Civic Center, and as such that the team would not return for the 2007-08 season. After renewed negotiations, an agreement was reached on April 12, 2007 to keep the team in Pensacola for at least next season. Negotiations for a longer-term deal were reportedly underway.

On June 23, 2008, the ECHL terminated the Ice Pilots' membership in the league, citing the owners' decision not to field a team for the 2008-09 season as grounds for termination. Team management was reportedly investigating the possibility of joining a less expensive league, like the CHS or the SPHL.[1]

Before the termination of their ECHL membership, the Ice Pilots had a run of bad performances. Their 2007-08 season finished 19-44-4-5, with only 47 points scored — the worst in the league. It was still better than their previous season, which finished 20-46-2-4 with only 46 points scored.