Eli Sanford Cobb was one of the first black physicians to practice in Pensacola. He is the namesake of the E. S. Cobb Community Center.

Born in Pensacola, Cobb's father died when he was just six months old, leaving his mother to raise him and his sister Ophelia on only her income as a domestic servant. Cobb began earning his own money at a young age, working along Pensacola's waterfront at night while going to school during the day, and was reportedly successful enough that he built his mother a house at age 17. After graduating from the Pensacola Normal Industrial School, Cobb attended Meharry Medical College in Nashville, Tennessee, graduating in 1915.[1] 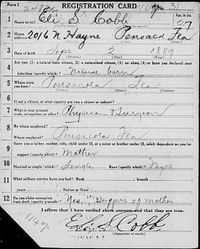 Cobb began practicing medicine in Pensacola in January 1916, becoming one of just seven black doctors then working in the city.[1]

Shortly after returning to Pensacola, Cobb was arrested in July 1916 for violating the city's "Jim Crow" law segregating streetcars. A conductor on the Bayshore Line asked a group of black riders to vacate seats for white passengers, and Cobb allegedly either didn't oblige the request or was slow to move.[2]

In March 1918, Cobb entered the U.S. Army and was sent to France just before World War I ended. While in France, Cobb attended classes at the University of Leon and interned at the Hospital Dieur, in addition to providing healthcare to ten small French villages and four companies of soldiers. Cobb was discharged from the Army in April 1919 and resumed his practice in Pensacola. Cobb aspired to become a surgeon, but was not allowed to join the all-white staff of Pensacola Hospital.[1]

A baseball fan, Cobb became frustrated in the 1940s when the local baseball club didn't allow black players on the team, and instead organized and financed his own semi-professional team, the Pensacola Sea Gulls. Three players from the team later made it to the major leagues.[1]

Cobb was also active in advocating for more opportunities for Pensacola's black citizens, serving as a member of the City of Pensacola Recreation Board's Negro Advisory Committee as well as the City Council's "Biracial Committee." Cobb long pushed for a community center to be built in the largely black Eastside neighborhood; the city council voted in 1966 to build the center and name it in Cobb's honor.[1] The center was completed and opened in 1967.[3]

Cobb was also a charter member of the Hanniton Watts American Legion Post 193 and a longtime member of St. Paul United Methodist Church.[4]

Cobb died in Pensacola on March 17, 1977 at the age of 87. He was buried at Resthaven Garden Cemetery north of Pensacola in the Brent area.[5]