The Daily Grind was a coffee shop and venue established opened in late 1999 on the southeast block of the Palafox and Main intersection in downtown Pensacola, next to Club Static and Geek Center Computers. The cafe was purchased by former owner Jeremy Marsh in 1999 when it was referred to as The Secret Cafe. At it's downtown location, The Daily Grind hosted shows on Friday and Saturday night; featured two internet gaming rooms, and several smaller rooms for movie viewing and general discussion and hang out; as well as a coffee bar which occupied the front of the building.

Notable local bands that had played at the downtown location included the former Second Track, Emulsiphier, and Phlegmatic. In addition to entertainment, the cafe offered a number of drinks with often unappealing names such as cherry popper and dirty girlscout. The venue was a popular dive for members of the area's Goth and Metal scenes. 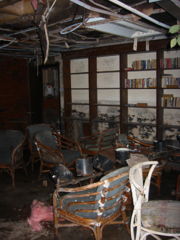 The venue threatened to close numerous times at it's downtown location because of alleged conflicts with landlord George Overby, however the location remained intact until the building was damaged beyond repair by Hurricane Ivan and a subsequent fire in September and October of 2004.

Following Hurricane Ivan, owner Jeremy Marsh salvaged much of the old venue and moved to a new location, purchasing the old Goofy Golf in 2005, and reopening the venue in June 2005, with The Selfish Gene as one of the headliners. The new location was several times larger than the old location, and offered the same amenities as the previous venue; however the new location boasted a large band room and main stage. The new venue hosted a variety of shows, including a MySpace tour in November of 2005.

The venue enjoyed renewed business through most of 2005 and 2006, however business began to decline in 2006, forcing owner Jeremy Marsh to close operations in October of 2006. The final show was played by Among Them. Following the shop's permanent closure, Marsh redeveloped and reopened the Goofy Golf in April of 2007.

The area where the Daily Grind once occupied on Palafox street is now a large vacant lot. Numerous attempts have been made to redevelop the property since the area was leveled. Traces of the entrance to the old cafe can still be found near the sidewalk.