From Pensapedia, the Pensacola encyclopedia
(Redirected from YMCA)
Jump to navigation Jump to search

The YMCA of Northwest Florida began as the Pensacola YMCA in 1903 (Some records mention a YMCA chapter in Pensacola as early as 1880). The YMCA's current facilities are located at 420 North Palafox Street. 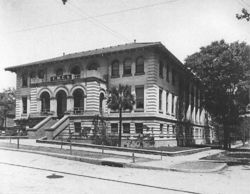 The original YMCA building at 402-406 North Palafox Street was constructed in 1903 and officially opened in 1906. The facilities included a gymnasium, bowling alley, café, and billiard room. The building was demolished in 1969.[1]