From Pensapedia, the Pensacola encyclopedia
Jump to navigation Jump to search
For the festival named for him, see Billy Bowlegs Festival. 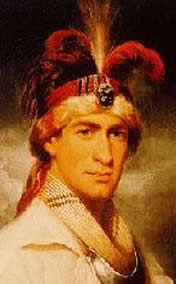 William Augustus Bowles (1763-1805), also known as Estajoca and traditionally as Billy Bowlegs, was a Maryland-born English adventurer who served with the Maryland Loyalists Battalion as an ensign during the American Revolution, having joined the British Army as a foot solider at fourteen. By 1777 he was an ensign in the British Navy, with which he sailed to Jamaica and later Pensacola, but was stripped of his rank for insubordination and dereliction of duty.

He left Pensacola with a group of Creek Indians, but returned in 1779 and fought with British forces against Bernardo de Gàlvez during the 1781 Siege of Pensacola.

In his life among the Indians, Bowles married two wives: one Cherokee and other Creek. His Creek wife was the chief's daughter, making him heir to Creek chiefdom. Pursuing his idea of an American Indian state after the end of the war, he was received by George III as 'Chief of the Embassy for Creek and Cherokee Nations.' With British funding, he returned to the Bahamas to train Creek Braves as pirates to attack Spanish ships.

A furious Spain offered $6,000 and 1,500 kegs of rum for his capture, and when he finally was captured he was transported to Madrid where he was unmoved by the King of Spain's attempts to make him change sides. He then escaped, commandeering a ship and returning to the Gulf of Mexico. In 1795 along with the Seminoles, he formed a short-lived state in northern Florida known as the "State of Muskogee", with himself as its president, and in 1800 declared war on Spain. In 1803, not long after having declared himself 'Chief of all Indians present' at a trial council, he was betrayed and turned over to the Spanish. He died in prison in Havana two years later, having refused to eat.

The Billy Bowlegs Festival, celebrated annually in Fort Walton Beach, is named for him.