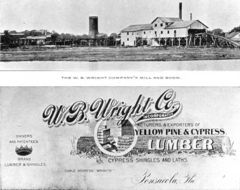 The W. B. Wright Company was a lumbering firm operated by William Benjamin Wright.

The company was initially established in 1872 by Wright's father, George Washington Wright, who retired in 1888. W. B. continued the business and incorporated it under his own name in December 1895.

The company owned two tugboats (Columbia and Hercules) and a fleet of lighters. It could also transport lumber to its mills via the Yellow River Railroad, of which W. B. Wright served as vice president.