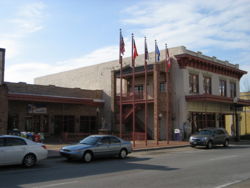 The Vincent J. Whibbs, Sr. Post Office Building (more commonly known as the downtown post office) is a U.S. Postal Service facility located at 101 Palafox Place that serves the 32502 ZIP code area. It was so designated by Congress on September 28, 2006 in honor of former Pensacola mayor Vince Whibbs, Sr., who died on May 30 of that year.[1] A designation ceremony took place on August 10, 2007.[2]

The premises include a courtyard featuring a water fountain, which was formerly located at the intersection of Palafox and Garden Street and used for horse watering, and a "Five Flags" display, which was established by the Downtown Improvement Board when the building served as their offices. The flag display came under fire from Postal Service officials who said their installations are only allowed to fly three flags: the U.S. flag, the official state flag, and the POW-MIA flag.[3] The issue was resolved because the display is located on the Palafox right-of-way and is not maintained by the federal agency.[4]

In June 2009, Rick Outzen reported on his blog rumors that the location may be closed due to budget cutbacks.[5]