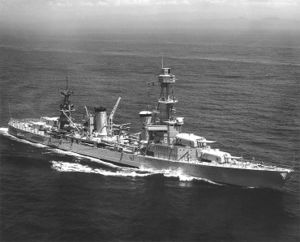 USS Pensacola (CL/CA-24) was a United States Navy ship, and the lead ship of her class of heavy cruiser. Operating from 1930-1946, she earned 13 battle stars for her service.

The Pensacola was laid down by the New York Navy Yard on October 27, 1926. The third United States Navy ship to bear the name Pensacola, she was launched on April 25, 1929, and commissioned on February 6, 1930, with Captain Alfred G. Howe in command.

Prior to World War II[edit]

Leaving New York on March 24, 1930, the Pensacola transited the Panama Canal to Callao, Peru, and Valparaíso, Chile, before returning to New York on June 5. For the next four years she operated along the eastern seaboard and in the Caribbean Sea, several times transiting the Panama Canal for combined Fleet battle practice ranging from California to Hawaii.

Pensacola departed Norfolk on 15 January 1935 to join the Pacific Fleet arriving San Diego, her new home port, on 30 January. Fleet problems ranged to Hawaii, one cruise took her to Alaska, and combined fleet maneuvers returned her briefly to the Caribbean Sea before she sailed on 5 October 1939 to base at Pearl Harbor, arriving on the 12th. Pensacola was one of six ships to receive the new RCA CXAM RADAR in 1940. Maneuvers frequently found the cruiser off Midway and French Frigate Shoals, and she made one voyage to Guam.

The Pensacola was decommissioned at Kwajalein on August 26, 1946. She was sunk as a target ship on November 10, 1948, off the coast of Washington state.