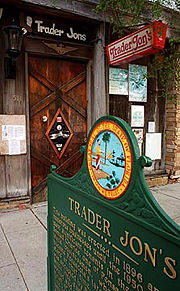 The Palafox Street entrance to Trader Jon's and historical marker, since taken.

Trader Jon's was a bar in downtown Pensacola that was a popular destination for officers and aviators stationed at Naval Air Station Pensacola.

Trader Jon's was founded by Martin "Trader Jon" Weissman and his wife Jackii on January 1, 1953. Trader was a World War II army paratrooper who was honorably discharged for an ankle injury before being deployed to Europe. The couple had previously operated bars in Miami and Key West before moving to Pensacola.

The bar's location at 511 South Palafox Street (now known as the Trader Jon's building) dates back to 1896 and was previously occupied by such tenants as Samuel Charles's shoe repair shop and Birgar Testman's ship chandlery. It was already a bar when Weissman purchased it. 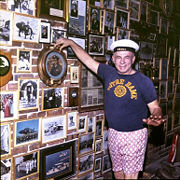 Trader Jon Weissman by a wall of Navy photographs

The bar was widely known for the eccentricities of its owner. Weissman did not set prices for drinks; rather, they varied depending on his mood and how well he knew the customer. This practice was often referred to as "Tradernomics." He was known for wearing mismatched socks and offered a reward to any patron who caught him in a matching pair. He also exchanged drinks for bits of Navy memorabilia, which led to the bar's signature collection and helped reinforce his "Trader" moniker. 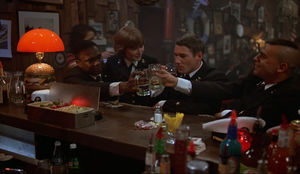 "TJ's" in An Officer and a Gentleman

Trader Jon's was the basis of the fictional club "TJ's" in the 1982 film An Officer and a Gentleman, which was inspired by the Officer Candidate School at NAS Pensacola.

With such an extensive collection of Naval Aviation paraphernalia, Trader Jon's become a haven, not just for Naval aviators, but for aviation enthusiasts from all over the world. Weissman developed a tour that he gave visitors, where he pointed out pieces that he was particularly fond of such as the Tailhook rhinoceros. In the course, of the tour he also made several claims that could never quite be verified but he told them with such sincerity that it was impossible to think that they might be anything other than true. For example, he always told people that a musty saddle was a gift from John Wayne and that Trader Jon's was in the Guinness book of World Records for "the largest Civilian collection of Naval Aviation Paraphernalia (which if it wasn't, it perhaps should have been.)

The Blue Angel Museum that he opened in the annex next to the main bar, was his pride and joy. Not only did it feature composite pictures of the team for years back, but it also featured pictures of the Blue Angels all the way back to the teams inception. The room was also used to host special events, the biggest of which was the party that followed the Blue Angels' Homecoming show in November every year.

Among the celebrities to visit Trader Jon's were Prince Andrew, John Wayne, Elizabeth Taylor and Bob Hope. In May 1986, Weissman was featured in Hope's birthday special, taped aboard the USS Lexington.

In March 1991, two 19-year-old women, Cary Higgins and Tonya Corrado, were killed in an car accident after drinking at Trader Jon's. Then son in-law, Steve Hammill was serving the two young women through out the night. Higgins, and Corrado were both frequent customers and were given permission to enter underage from Weissman himself knowing the girls were not of age, as Cary Higgins had once worked as his employee and was known by the other employees. Cary Higgins was the only daughter of a Naval Officer. She was also survived by her Mother, brother, and her young daughter. In July 1992, Weissman was fined $1,000 by the Florida Division of Alcoholic Beverages and Tobacco for serving alcohol to the underage women, and the bar closes for 18 days. In December 1995 Weissman settled a lawsuit with the families of the two women for an undisclosed amount.

The Trader Jon's building was designated an historic site by the State of Florida in 1992.

Trader Jon's closed in 1998, a year after Weissman suffered a debilitating stroke that kept him from work; he died on February 18, 2000. A group called the "Trader Jon's Preservation Squadron," led by former Blue Angels leader Bob Stumpf and Marine Corps Major Kent Bolin, raised $300,000 to preserve the bar and its contents as a restaurant and a kind of museum. Their purchase offer was rejected by Weissman's family, who wanted to see the club remain open.[1]

Navy flight instructor Matt Heckemeyer and his wife Kerry purchased the business for $465,000 on August 8, 2000. After spending an estimated $150,000 on renovations, they reopened the bar on September 1 of that year — what would have been Weissman's 85th birthday.

The Heckemeyer's hired Mientje Green as the general manager. Green had previously managed the famous Tipitina's club in New Orleans with her husband Jim. They planned to cater to a wider clientele by making Trader Jon's a live music venue. ""We're thinking about blues, Cajun, zydeco, jazz, Green said. "We want to give the people something different and something they'll support.[2]

On January 16, 2001, a fire erupted in the "Blue Angels Museum" portion of the building, but was quickly extinguished with minor damage.

The bar closed for good on November 9, 2003. Matt Heckemeyer, who had divorced from his wife since buying the bar, was at a loss to pinpoint the exact reason why the bar went under; however, many in the Navy Community, who saw Trader Jon's in its heyday, suspected it had "a lot to do with the changing environment" of a Navy that frowned upon excessive drinking.[3]

The Trader Jon's building was sold for $562,500[4] to Sarah and Walter Brown, who planned to expand their women's boutique Sarah's into the space — months before Hurricane Ivan destroyed the store's main location in the adjacent Phenix Building — but these plans were later scrapped.

The collection of Navy memorabilia, appraised at approximately $2 million, was purchased by law firm Aylstock Witkin & Sasser and donated to the Naval Aviation Museum Foundation. It will be featured in the Admiral John H. Fetterman State of Florida Maritime Museum and Research Center. Before his death, Admiral Fetterman stated his desire to see the "Trader Jon's" name return in the form of the museum's restaurant.