Theodore Thomas "Tom" Wentworth, Jr. (1898-1989) was a Pensacola entrepreneur, politician and preservationist whose collection of artifacts and miscellanea was organized as the T. T. Wentworth Jr. Florida State Museum in 1988. T. T. Wentworth, Jr. is archived as having been the head of the KKK in Escambia County, holding the title of "Exalted Cyclops".[1]

An ad for Wentworth's bicycle shop

Wentworth was born in Mobile, Alabama on July 26, 1898, the oldest child of Theodore Thomas Sr. and Elisabeth Goodloe Wentworth. The family moved to Pensacola two years later, where they had four other children. Wentworth Sr. worked for a newspaper and later managed one of the first summer resorts on Santa Rosa Island, from 1904 until it was destroyed by the hurricane of 1906. The hurricane marked the beginning of lean years for Wentworth's family, and he began working as a newspaper boy for supplement income. It was in 1906 that young Tom Jr. found an 1851 gold coin in the sandy beach south of Florida Blanca Street, sparking a lifelong fascination with historical artifacts.

Tom continued to work small jobs as an office boy and telegraph messenger, and at twelve he helped his father manage a grocery. In 1914, at age sixteen, he opened his own bicycle repair business at the corner of Belmont and Davis Streets. The shop soon expanded into sales and sporting goods, and in 1922 he moved to a brick building across the street (now occupied by Adache Group Architects). Wentworth promoted the business by forming a bicycle club and holding races. 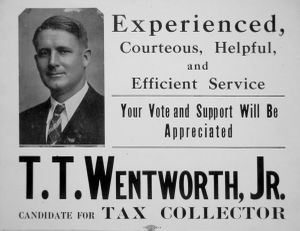 Wentworth first entered politics in 1920, running for the office Escambia County Commissioner for District 1. His campaign platform included a promise to keep the county courthouse clock at the correct time. This important task required climbing the tower weekly and manually winding the clock, an easy feat for the young, fit Wentworth. He also utilized his bicycle club, printing $35 worth of campaign flyers and distributing them all over the county via the club members. He won the election and took office in 1921 as the youngest county commissioner in the state's history. Among his accomplishments was a voter referendum for the first highway bond issue in Escambia County, which helped pave the area's major roads.

Four years after his County Commission tenure, Wentworth reentered politics by running for Escambia County Tax Collector. He was elected in 1928 and served until 1940.

In 1945 Wentworth put to use the property-appraising skills he acquired as tax collector and became a real estate agent. His success in the trade would eventually make him a millionaire. In 1960 he was named Realtor of the Year by the Pensacola Board of Realtors, which elected him president the same year. 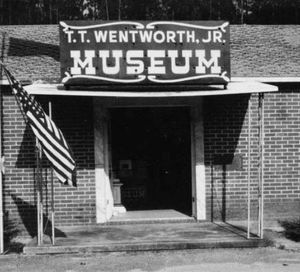 The first Wentworth museum, built on his Ensley property

Throughout the 1920s, Wentworth began displaying his growing collection of historical items in his bicycle shop's display windows. As Pensacola grew, he became aware of the need to preserve the city's historic buildings in the face of rapid development. He was a charter member of the Pensacola Historical Society when it was founded in 1933. In 1935 he used his political influence to advocate the preservation of old forts and the marking of historic sites. He salvaged 20 tons of "Fighting English" cannons, slated for junk in Mississippi, and returned them for display at Fort Pickens.

In 1938, he purchased the Dorothy Walton House and donated it to the City of Pensacola to be used as a museum. During World War II, the threat of submarine attacks and the lack of volunteers forced the museum to close its doors. Wentworth moved the collection to his newly-constructed home in Ensley, and in 1956 he began work on a separate building next door to house the collection.

The first T. T. Wentworth, Jr. Museum opened on April 7, 1957 at 7100 Old Palafox Street. Some of the more memorable items on display were a petrified cat, a shrunken head and a pair of shoes owned by "World's Tallest Man" Robert Wadlow. Other historical artifacts included a 1,500-year-old dugout canoe, pre-Columbian and American Indian artifacts, a map dated 1555, a Confederate torpedo and a Confederate Navy official's desk. 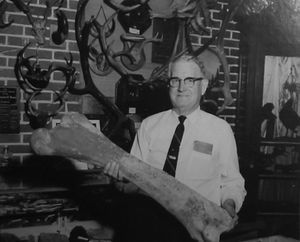 Wentworth with a piece of his collection

Wentworth never accepted money at the museum, but many of the visitors donated bits of military memorabilia that were added to the collection; Wentworth said he "never threw nothin' away."[2] The growing collection and his preservation efforts earned Wentworth, known as "Mr. Tom" to many, the nickname "Mr. History," first applied in a 1960s News Journal editorial by J. Earle Bowden.

By 1983, the collection had grown to more than 150,000 items, and despite two expansions to the Old Palafox Street museum, could no longer be contained in the building. Wentworth was convinced to donate the collection to the State of Florida — the largest historical collection ever donated by a private individual — on the condition it would be housed in a permanent location. As Bowden recalled,

In 1983, in a News Journal conference room, Mr. Tom remained uncertain about signing away his "Gift of a Lifetime." We had assured him the collection would remain in Pensacola. Brosnaham said, "Tom, sign the deed. You are going to die one of these days." And Frenkel said, "Tom, there's no better way to be remembered. Come on, give this collection to the people of Florida." "Believe I will," Mr. Tom said.[2]

With Pensacola City Hall moving to a new building, completed in 1985, the old 1907 City Hall building on Jefferson Street was selected as the home of Wentworth's collection. It was renovated with a $1.2 million state grant and rededicated as the T. T. Wentworth, Jr. Florida State Museum on March 5, 1988. The museum opened to the public in November. Wentworth was present to cut the ribbon, and he told the crowd, "I'm so proud to be here. I didn't know if I'd be able to come, but I come anyway."[2]

A year later, on July 16, 1989, Wentworth died of cancer at his home. Florida Governor Bob Martinez said of him, "T.T Wentworth gave Pensacola one of the greatest gifts an individual can give to his community — its past. By working to preserve the city's heritage, he made sure future residents will always know the importance of its past."[3]