From Pensapedia, the Pensacola encyclopedia
(Redirected from The Casino)
Jump to navigation Jump to search 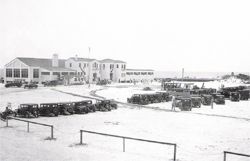 The complex featured a dance pavilion, bath houses, shops and a restaurant. Events included boxing tournaments every Tuesday, sponsored by the YMCA, and the Miss Florida beauty pageant. The Frisco Employees' Magazine described the facilities:

The Casino on Santa Rosa Island is a splendid building of reinforced concrete and hollow tile structure with its floors elevated 18 feet above sea level. Its bath house accommodates 500 persons, its dining room 300, and its dance hall 200. A fishing pier 1,200 feet long is in process of completion, and reaches from the casino out into the gulf where water is 22 feet deep.

Over four decades after it opened, the Casino was demolished in 1972. The extant Casino Beach area is named for it.

According to the July 1931 issue of The Frisco Employees' Magazine, the dedication ceremonies for the two bridges and the Casino drew a crowd of 20,000, including "people from Alabama, Florida, and Mississippi. with a generous sprinkling of business men and industrial leaders from Memphis, St. Louis, and other mid-western cities."[1]

The ceremonies began on June 12, when a contingent of about 300 guests of the City and the Pensacola Bridge Corporation made their way across the two bridges to the Casino resort, where they spent the afternoon. In the evening, a banquet was held, after which the guests were entertained with dancing and boxing until around midnight.

On the morning of June 13, a parade made its way through Pensacola, pausing for dedication ceremonies at the bridges before making its way to the Casino, where an all-day carnival was held. The Frisco Employees' Magazine recounted the events:

First on the program was the official dedication ceremony at the Casino. Addresses were made by Secretary of State for Florida R. A. Gray, representing Governor Doyle Carlton, who was unable to attend; Major-General Lyttle Brown, chief of the U. S. Army Engineers, who spoke in behalf of Secretary of War Patrick Hurley; Cary D. Landis, attorney-general of Florida; Birch O. Mahaffey of St. Louis, one of the financial backers of the project, and A. C. Blount, president of Pensacola's Chamber of Commerce. Rear Admiral T. P. Magruder, commanding the Eighth Naval district of which Pensacola is a part, delivered the final address of the ceremony. Both the U. S. Naval Station and Thirteenth Coast Artillery Bands furnished music for the event, and Mr. J. E. Yonge presided as master of ceremonies.

After the ceremony the crowd, numbering many thousands of people, inspected the Casino proper and soon the surf was filled with shouting children and smiling grownups enjoying the cool waters of the Gulf of Mexico. A dinner was served in the Casino dining room at noon, and at 2 o'clock, a program of boat races began in Santa Rosa Sound, under the direction of R. G. Patterson, commodore of the Pensacola Yacht Club. Skippers from eight of the gulf coast yacht clubs competed with skippers from the Pensacola club and the Naval Alr Station in a series of fish class sloop races. Later in the afternoon a program of motor boat races was run. Following these events a lull in the official program provided time for another plunge in the surf until dinner was served.

The night program was fully as thrilling as that of the daylight hours. An anti-aircraft battery from the coast artillery post at Fort Barrancas gave an exhibition of searchlight and anti-aircraft firing. Tracer bullets were used and the spectacle was of great interest to the throngs of witnesses. Following the gun fire, a huge display of fireworks consumed an hour and then the program brought most of the throng into the Casino or on its cooling verandas, where dancing continued until well past midnight.

The Casino endured as a popular tourist destination through World War II and was renovated several times over the years. In the 1960s, however, it fell into disrepair. Considered a "white elephant" by the Santa Rosa Island Authority, it was demolished in 1972.[2]

Beams from the ballroom were salvaged and incorporated in the "Apple Annie's" courtyard in Seville Quarter.

The beach near the site of the Casino is still called Casino Beach.

Unless otherwise noted, photos courtesy of the Pensacola Beach Preservation and Historical Society [1].