From Pensapedia, the Pensacola encyclopedia
(Redirected from Streetcar)
Jump to navigation Jump to search 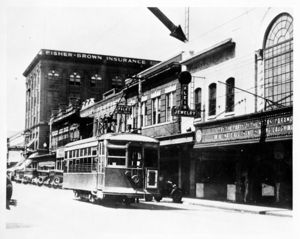 A trolley travels south on Palafox Street, circa 1920s

The Pensacola streetcar (trolley) system was a public transportation system that was operated by various entities between 1884 and 1932.

The streetcar system in Pensacola can be traced to Conrad Kupfrian, a German immigrant who was reportedly inspired by the horsecars he saw in St. Louis on a business trip. He formed a partnership, the Pensacola Streetcar Company, with Henry Pfeiffer and John Cosgrove. The men raised $50,000 in capital for the project and, on November 15, 1882, convinced the Pensacola City Council to pass an ordinance allowing steel track to be placed in the roadways. The first streetcars, which went operational in 1884, ran from Pensacola Bay north along Palafox Street to Wright Street, then east to the Union Depot, then south along Alcaniz to Gregory and west to DeVilliers Street. A north-south link at DeVilliers went south to Government Street and east again to Palafox. A general fare cost five cents, and cars passed about every ten minutes during high-traffic periods. The company addressed the issue of low ridership after business hours by creating an amusement park destination, called Kupfrian's Park, in the North Hill neighborhood, extending the line west from DeVilliers on La Rua and north on J Street.

Between 1890 and 1891, the Pensacola Streetcar Company was reorganized as the Pensacola Terminal Company under directors J. H. Carter, J. M. Carter and Thomas C. Watson. They created a new line, called the Dummy Line for its use of steam dummy engines, that stretched along Bayshore Drive to Warrington and Woolsey, allowing Navy Yard employees a convenient means to reach the city core. The lines were also extended north to Blount Street and east to East Pensacola Heights. The cost of the extension, which included bridges over Bayou Chico and Bayou Texar, was paid by selling revenue bonds.

An economic downturn affected the streetcar company in 1897. It was reorganized again as the Pensacola Electric Terminal Railway Company, with Captain William H. Northrup as president. William A. Blount's law firm assisted in the transition and introduced northern firm Stone & Webster to help develop the utility. The Pensacola Electric Light & Power Company was also incorporated in 1897, building a coal-powered generator at Baylen and Cedar Streets that provided power to much of the area. Elevated wires were placed over the streets to provide electricity to the trolleys; a double set of tracks were placed in the broad Palafox Street; and a streetcar barn and mechanical shop was built at Gadsden and DeVillier Streets.

It was in 1906 that the Stone & Webster organization took charge of the traction and electric lighting systems of Pensacola, both of which it has improved. At that time there was a line seven and one-half miles along the shore to Fort Barancas (sic) — is, to the government reservation, where the navy yard is located, and where a good-sized colony exists. This line was electrified for only about a third of the distance, steam being employed over the balance. Today, electricity is the sole power. The city lines of the old company were in inadequate condition, but the situation in this respect has since been much improved. All told, the street railway company now operates 20.39 miles of track. Its equipment consists of 26 passenger cars, with 9 trailers, together with one express car and 11 miscellaneous cars. Power for both the street railway and lighting is supplied from a brick power station, with a capacity for 700 Kw. for lighting and 800 Kw. for traction purposes. The equipment includes a new 300 Kw. Parson's steam turbine, and a new direct connected 500 Kw. railway generator. A brick repair shop, a car barn and several parcels of land in the city are owned by the company. The distributing system of the lighting plant is in excellent condition, having recently been overhauled and thoroughly rebuilt. The electric light franchise is perpetual, having been granted by special act of the legislature. The railway franchise expires in 1933. That part of the line running to the government military reservation is operated under authority granted by the Secretary of War, the grant on the naval reservation being by special act of Congress.

From April 5-May 13, 1908, the Pensacola Electric Company's unionized workers staged a strike. The highly contentious strike led to numerous incidents of violence, requiring the Florida state militia to be sent to Pensacola to maintain peace.

On May 19, 1908, shortly after the strike's end, two streetcars from the Park and Belt lines collided, killing one woman and injuring another.[1]

Demise of the streetcar system[edit]

In 1928 the St. Louis-San Francisco Railway bought the old dummy line for freight purposes; a bit of trackage still exists on the south side of Main Street between Clubbs and A, where the line curved southwest toward Pine.

In 1929, the City passed an ordinance authorizing Gulf Power to discontinue service and remove trackage for the portion of the system servicing the Hawkshaw area.[2]

The City authorized Gulf Power to surrender its streetcar franchise in November 1931, "in consideration" of an $18,000 credit to be applied towards the City's debt to Gulf Power.[3] After adoption of the ordinance terminating the franchise, Gulf Power agreed to reduce the interest rate on the City's debt from eight to six percent per year.[4] Streetcar service was discontinued in 1932, replaced by motor bus service operated by the Pensacola Coach Corporation.

However, the Avery law was declared unconstitutional by the Florida Supreme Court a month later. The Pensacola City Council responded with an ordinance that was

somewhat similar to the state law which was declared unconstitutional. It was drawn however, in such shape that it will hardly be declared unconstitutional if any attempt is made to carry it to the Supreme Court. The street railway company will divide the cars as it did during the time that the state law was being complied with, except that cards will be posted designaling the white and colored parts of a car. The colored population seems to be satisfied and it is not expected that the cars will be boycotted as was the case when the state law [became] operative.[9]

Despite being vetoed by Mayor Charles H. Bliss, the ordinance was passed by the council and went into effect on October 13, 1905. 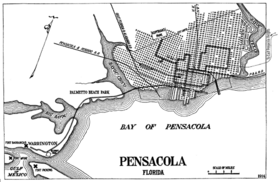 1914 map of the streetcar system

The East Hill line ran in somewhat of a loop, going up Alcaniz Street from Gregory to Brainerd Streets, then east on Brainerd to 6th Avenue, north on 6th Avenue to Blount Street, east on Blount to 16th Avenue, south on 16th to Jackson Street, then west on Jackson to 8th Avenue, then south on 8th to Wright Street.