Robert Lee Fulton "Bob" Sikes (1906-1994), nicknamed the "He-Coon," was a United States Congressman who represented Florida's 1st Congressional District[1] from 1941 until 1978 and was responsible for making Eglin Air Force Base one of the largest military installations in the world.

Sikes was born in Isabella, Georgia, a small town near Sylvester in Worth County. He graduated from public schools before attending the University of Georgia, where he received a B.S. in 1927, then went on to earn an M.S. in English from the University of Florida in 1929.

In 1933 Sikes began work as a newspaper editor in Valparaiso. He went on to publish a weekly newspaper in Crestview, the Okaloosa News-Journal, and in 1937 served as president of the Florida Press Association. His publishing career would last until 1946. It was during this time that he held his first political office, in the Florida House of Representatives, from 1936 until 1940. 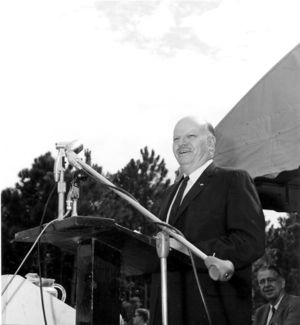 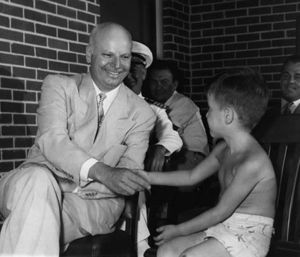 Sikes was elected to his first Congressional term in 1940 and was sworn in on January 3, 1941. He briefly resigned from office on October 19, 1944 to serve in the U.S. Army during World War II. Following a three-month tour of Europe, he retook his Congressional seat in 1945. He would rise to the Army rank of major general in the reserves.

Sikes eventually became chairman of the House Appropriations Subcommittee on Military Construction, which oversaw the spending of about $3.5 billion annually. Sikes ensured that much of this money ended up in Florida — especially his district. His efforts resulted in the creation and expansion of 14 military bases in the Panhandle, including Eglin Air Force Base, Pensacola Naval Air Station and Tyndall Field.

Reportedly, Sikes once blocked the transfer of a 10-person unit from Florida until the Pentagon promised to replace it with a similar-sized unit.[2] His efforts also led to the January 8, 1971 authorization of the Gulf Islands National Seashore. He gained the nickname "He-Coon" for his work, a reference to Cracker folklore. He described the creature in his autobiography of the same name:

The he-coon was a kind of leader. He knew where the food was and where to get the water. He was supposed to have been able to keep off his enemies and to protect his own. He was simply supposed to look after those around him who depended upon him.

Sikes was a segregationist, like most contemporary Southern politicians. During World War II, he protested the fact that black soldiers were billeted alongside white soldiers at the Naval Air Station and was assured by Rear Admiral George D. Murray that "in no cases is indiscriminate mixing of these groups permitted."[3]

Sikes attempted to be receptive to all his constituents, regardless of race. Crestview City Councilman Sam Hayes, who helped found the local NAACP branch, said of Sikes, "No matter what your color was, he listened to you. It didn't matter how high up or how down low you might be. He was a fair man."[2]

Controversy erupted when a public-affairs lobbying group accused Sikes of using his office for personal gain. He owned stock in a Pensacola NAS bank that had been established by government officials at his urging, as well as military contractor Fairchild Industries, which benefitted greatly from government contracts awarded by Sikes. He failed to disclose his interest in both these companies in the requisite financial reports. On July 29, 1976, Sikes was reprimanded by a 381-3 vote of the House of Representatives for the financial misconduct.

In a statement released after the reprimand, Sikes said, "I had no intent to violate any rule of this House, and any inadvertent and technical violation did not benefit me in any way. All of my personal business transactions are conducted openly, in my own name and without concealment, and are simple honorable transactions."[4]

Despite the controversy, Sikes was overwhelming reelected by his district the same year, with 78% of the vote. However, on January 26, 1977, he was removed from the Appropriations Subcommittee which he had chaired and from which he derived most of his political power. His influence diminished, Sikes decided not to seek election and left office on January 3, 1979. He was replaced by fellow conservative Democrat Earl Hutto.

Sikes blamed his fall from power on the "flaming liberals" who opposed him in Congress, saying in a 1982 interview, "It was an inquisition. The press had fun because they love to see blood flow from a conservative, and my blood was flowing."[2]

According to W. D. Childers, who campaigned for the State Senate alongside Sikes, he could be a fierce polemicist to his enemies. "He would cut 'em to ribbons. People would come just to hear him talk about his opponents. … Sikes had a philosophy that he always repaid his political debts, and when he paid them back, he always added interest."[5] 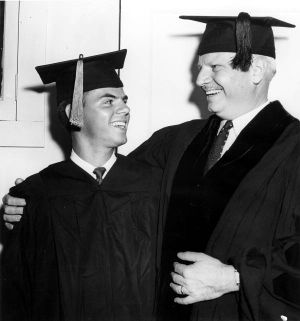 Bob Sikes was married three times. His first marriage to his college sweetheart produced his only two children, Bobbye and Robert. She divorced him shortly after they moved to Washington. Sikes married Inez Tyner in 1949, and they were divorced in 1983.[6] In June of the same year, at age 76, he married his third and final wife, 41-year-old Joan Thomas Dunning.

Sikes died on September 28, 1994 after a long battle with Alzheimer's Disease. He was interred at Liveoak Park Memorial Cemetery.

Sikes' daughter Bobbye published a book in 2005, Justice Denied: The destruction of the life and legacy of the He-Coon, which accused the widow Joan Sikes of denying him medical care and exploiting his illness to change his will in her favor. She also alleges that Joan was aided by a conspiracy involving, among others, Crestview Mayor Ted Mathis and State Senator Durell Peaden, her father's physician at the time.[7]

The following have been named in honor of Sikes: