From Pensapedia, the Pensacola encyclopedia
(Redirected from Public School No. 1)
Jump to navigation Jump to search 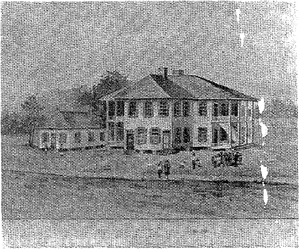 As depicted in the Florida Historical Quarterly.

High School No. 1, also called Public School No. 1 or The Academy, was an early Escambia County public school, located on the north side of Wright Street between Guillemard and Tarragona Streets. It is the only school identified on the Wellge map of 1885. The 1885 Pensacola directory provides the following information:

A 1959 article by Occie Clubbs in the Florida Historical Quarterly provides further information:

"...In 1875, for the first time, school assembled in a building constructed for school purposes. This edifice was on East Wright Street between Guillemard and Tarragona Streets and became known as the Academy."

Public School No. 1 continued in operation until 1887, at which time operations moved to a new school building at Palafox and Jackson Streets on Lee Square.