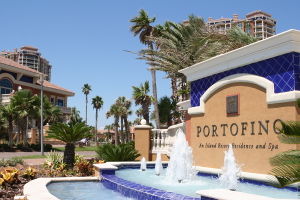 A fountain at the Portofino entrance

The Portofino Island Resort & Spa is a major condominium development on the eastern edge of Pensacola Beach, just west of the Gulf Islands National Seashore's Santa Rosa Area (Opal Beach). It consists of five towers, each with its own parking on the lower levels, and a "Lifestyle Center" containing the spa and exercise facilities, the Terracotta restaurant, and the Terrazzo Grille outdoor dining.

In 2007 the resort came under fire for marketing materials that seemed to rename Santa Rosa Island after itself. The official website welcomed guests "to Portofino Resort on beautiful Portofino Island."[1] A direct mail promotion also referred to the beach as "Portofino Island," omitting any reference to Pensacola Beach.[2] Of note, the materials also refer to the island as being "nestled between … the Gulf of Mexico and the Santa Rosa Bay" (and, alternately, Pensacola Bay), instead of Santa Rosa Sound.

An online petition was created to protest the marketing initiative.