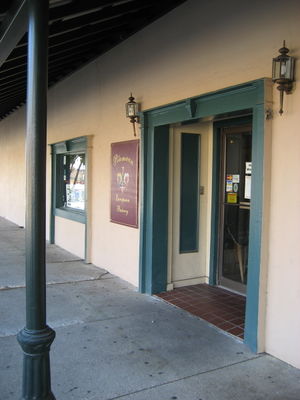 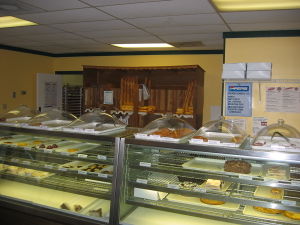 Pitzmann's shortly before its September 2007 closure

Pitzmann's European Bakery was a bakery located at 101 South Jefferson Street in downtown Pensacola. Formerly Napoleon Bakery, it was owned by Austrian couple Wanda and Wolfgang Pitzmann, who moved to America in 1997. Wolfgang began working as a baker at Napoleon's, and they purchased the store from owner Pierre Kaufke in October 2002. They expanded the business by 1,100 square feet, adding a dining room in the rear, and reopening in March 2003.[1]

The bakery continued to offer a number of traditional French breads and pastries, but added other dishes as well. Wolfgang said after their March 2003 re-opening, "We want to keep it the way it is, though I am adding a few Austrian items."[1]

Although Pitzmann's served a variety of entrees at breakfast and lunch, the owners insisted, "We don't want to compete with the restaurants. We have good ones here. This is not a restaurant — it's still a bakery."[1] It was a major supplier of baked goods for local restaurants.

When Wanda was diagnosed with breast cancer, the Pitzmanns were advised by doctors to avoid the bakery's long workweeks. The couple searched for qualified bakers who could run the operation in their absence, but found none.[2] The bakery closed on September 28, 2007.