From Pensapedia, the Pensacola encyclopedia
(Redirected from Phineas Phogg's)
Jump to navigation Jump to search

Seville Quarter is an entertainment complex in downtown Pensacola comprised of several "rooms," each with its own theme: Rosie O'Grady's, Lili Marlene's, Fast Eddie's, Apple Annie's, Palace Oyster Bar, Phineas Phogg's and End O' The Alley Bar. The rooms are connected by covered brick alleyways. An open-air courtyard with fountain sits on the north side of the complex. Another building, Heritage Hall, was added in May 2003.

The complex is decorated in a largely Victorian style with furniture and other elements salvaged from historic buildings from Pensacola and across the world.

Seville Quarter started as "Rosie O'Grady's Warehouse," a beer-and-peanuts saloon specializing in Dixieland jazz. It was founded by Bob Snow, an ex-Navy pilot and former trumpet player for the Minneapolis symphony whose band, South Hangar Six, played jazz at private parties and nightclubs around Pensacola.

Snow rented a dilapidated brick warehouse on East Government Street (formerly home of the Pensacola Cigar and Tobacco Company) for $140 per month, and he and his bandmates made repairs and built a small bandstand. His total startup budget was limited to a last military paycheck of $400, $1,500 for the sale of his sports car, $1,700 from pawning an antique shotgun collection, and $50 from some old bottles he found behind the warehouse.[1] When an air conditioning contractor demanded up-front payment for the $3,500 cooling system, Snow couldn't afford to pay. Luckily, attorney Wilmer Mitchell was able to convince the Citizens and People's National Bank to issue a $5,000 loan.[2] 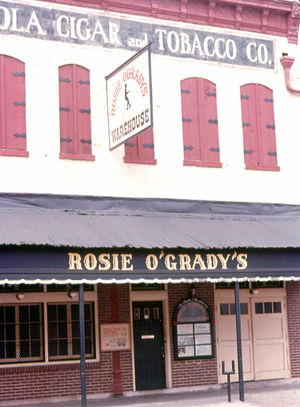 Opening night was August 16, 1967. An early writeup of the club described the scene:

In Rosie's, you find old timey silent films with such stars as Charlie Chaplin and W. C. Fields. You'll find the twangy, happy sound of banjos.

And sing-alongs. The words are flashed on a screen and when the banjos begin plucking away, it'll take a real music hater to keep from singing along with those nostalgic melodies!

But most of all there's the great sound of Dixieland music. And what music!

"This music makes me go," says a college gal when the Dixie Racing & Marching Society Band opens up. "Something happens inside — and whammo!"[3]

The Monday after the opening weekend, Snow was able to repay the bank loan and get his shotgun collection out of hock.[2] He later purchased the warehouse building for $28,000.

After the success of Rosie O'Grady's, Snow expanded the Seville Quarter complex with the Lili Marlene Aviator's Pub immediately west of Rosie's. It opened on March 19, 1971.

In 1972, Snow began work on a similar venture in Orlando called Church Street Station. In the meantime, he continued to add rooms and antique furnishings to the Pensacola complex.

Orlando's Church Street Station, with its "Rosie O'Grady's No. 2," opened in July 1974. It is widely regarded as the inspiration for Walt Disney World's Pleasure Island.

In 1980, Seville Quarter was named an "official" state attraction by the Florida Attractions Association — one of the only such attractions in North Florida at that time.

By late 1982, the original Rosie O'Grady's room had become unpopular compared to other areas of the complex, and Snow decided to close the room for a major renovation. "Rosie's needs a breath of fresh air, and that's what I'm going to give it," he said. Seven months and more than $300,000 later, Rosie O'Grady's reopened on May 4, 1983.[2]

As Bob Snow devoted most of his attentions to his Church Street Station complex in Orlando and other ventures, he began seeking a buyer for the Pensacola operation.

Snow retained a $1.7 million second mortgage on the complex, in addition to the first mortgage of $850,000 held by First Mutual Savings Association.

In August 1986, Snow began foreclosure proceedings against SEC and sought to have a receiver appointed to oversee operations. SEC filed Chapter 11 bankruptcy on September 25.[7]

SEC closed Seville's doors on January 5, 1987 and filed for Chapter 7 bankruptcy shortly thereafter. According to Bunt, the initial debt service was "unserviceable" and had doomed the new ownership. "We never had a chance from the start and Snow knew that and so did the two guys [Goliwas and Trauth] who put together the deal we got. They knew it was just a matter of time from the beginning."[8]

Bob Snow refuted those claims and stated his desire to "get Seville Quarter into the hands of competent operators who know the business and have the money to make it into the institution it once was."[8]

On November 23, 1988, Bob Snow's longtime attorney Wilmer Mitchell, who had maintained his law offices in the Rosie O'Grady's building even during its closure, announced a lease/purchase agreement with Snow to reopen Seville Quarter and operate it a a "Mom and Pop affair" with the rest of the Mitchell family.[9]

After about $60,000 in initial costs, several of the rooms reopened on December 16, 1988.[10] Complete renewal of operations took over a year and several hundred thousand dollars. 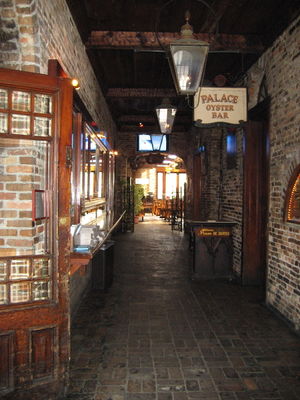 A hallway inside Seville Quarter 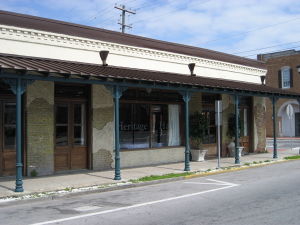 The Rosie's building was previously the Pensacola Cigar and Tobacco Company. The door to the main entrance was salvaged from a mansion in Mobile.

It is the home of Seville's "Dueling Pianos" show. The featured drink is the Flaming Hurricane.

Lili Marlene's World War I Aviators Pub is located across from Rosie's. It is adorned with model biplanes that hang from the ceiling.

The Lili's building originally housed the Pensacola Printing Company. The bars in Lili's came from the Blackstone Hotel in Chicago and date back to 1880. The long wooden benches hail from London, chairs from the Massachusetts Supreme Court, pub mirrors from Edinburgh, Scotland, and light fixtures from an Atlanta mansion.

Among the salvaged furniture are doors and wheels from old ships, English chandeliers, New Orleans cypress doors, benches from the old L&N Passenger Depot. The wainscot and wall paneling were fashioned out of solid wood doors from the American National Bank Building.

Apple Annie's Courtyard is a large reception room used for various functions. In addition to standard fare, the bar also serves a variety of frozen drinks.

A large fountain is located in one corner of the courtyard, topped with a stone eagle from the Chicago Fraternal Order of Eagles building. Apple Annie's also features wooden beams salvaged from the ballroom of the Casino, Pensacola Beach's first tourist attraction, and glass doors from the Ursuline Convent in New Orleans.

Heritage Hall, which occupies the former Barrios and Acosta Building slightly east on Government Street, was added in May 2003 as a space available to rent for banquets, meetings and private parties.