Otto Heinrich Louis Wernicke (1862–1930) was a manufacturer and lumberman known for his involvement in the construction of the first Pensacola Bay Bridge, which linked Pensacola to the Fairpoint Peninsula and Santa Rosa Island, opening Gulf Breeze and Pensacola Beach to development.

Wernicke was born in 1862 at Hayton, Calumet County, Wisconsin to Carl Frederick Wernicke and Sophia Frickey. In 1880, he was attending Commercial College in nearby Fond du Lac.[1]

Turn of the century ad for the Wernicke Elastic Bookcase System

On December 6, 1892, Wernicke was granted a patent for what he called a "sectional stock case" — what would come to be known as stackable, modular, or elastic bookcases.[2] He formed The Wernicke Company and opened a factory on Nicolett Island in Minneapolis to manufacture the bookcases.[3] In 1897, needing more space, Wernicke moved his manufacturing operation to Grand Rapids, Michigan.

The company's manufacturing operation was relocated to Norwood, Ohio, a suburb of Cincinnati.

Globe-Wernicke endured a series of mergers and acquisitions, becoming Globe-Weis in 1963. The brand continues to operate as a subsidiary of Kansas-based Cardinal Brands.

After a falling out with Globe-Wernicke president Henry Yeiser in 1904, Wernicke purchased the Fred Macey Furniture Company, renaming it The Macey-Wernicke Company and later simply The Macey Company.

Wernicke moved to Pensacola in 1916, purchasing the Pensacola Tar and Turpentine Company. 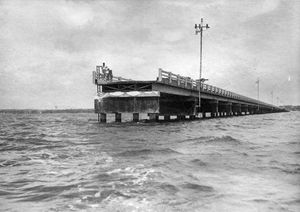 The Pensacola Bay Bridge under construction.

In the early 1920s, Wernicke became interested in the development of a bridge spanning Pensacola Bay and linking Pensacola to the Fairpoint Peninsula and Santa Rosa Island.

Around 1925, Wernicke rented office space at 15 West Garden Street and began to pursue the idea seriously, investing more than $50,000 of his own money to get the project up and running. While travelling the state, he found engineer R. G. Patterson of the Minneapolis firm Johnson Drake and Piper constructing bridges in the Panama City area. After a visit to Pensacola, Wernicke convinced Patterson of the viability to a bridge over Pensacola Bay, and Patterson agreed to help Wernicke with the project.[4]

The first stake for the bridge was driven in February 1929. The bridge was eventually opened on June 13, 1931, less than a year after Wernicke's death.

Wernicke died of a heart attack on August 20, 1930. He is buried at Roberts Cemetery.

His papers from the last four years of his life were donated to the University of West Florida in 1982 by his grandson Julius.