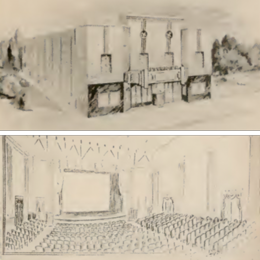 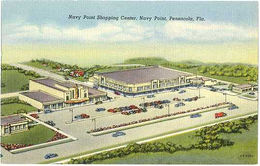 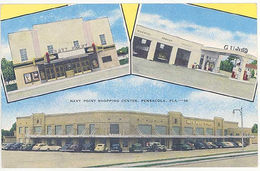 The Navy Point Theater was a movie theater located in the Navy Point neighborhood of Warrington that was designed to serve as "the principal recreation center of a new residential and shopping district for officers and personnel" of the Naval Air Station.[1]

The development was headed by Francis Johnson[2] and the plans designed by Birmingham architect Harry Pembleton.[1] It began operations mid-1946 and opened formally on October 21 of that year.[3]

When the theater was purchased by Mr. and Mrs. Lloyd Rushing in April 1966, the couple asked 15-year-old concession stand worker Mike Kimberl to serve as manager. A student at Escambia High School, Kimberl operated the entire theater on his own, including ticket sales and concessions, until "my nerves got so bad that we had to hire two girls to take the other jobs."[4]

The theater closed in (date needed).