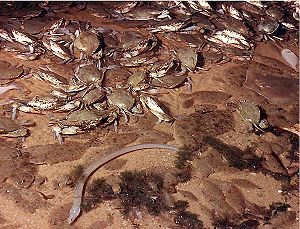 Jubilee photo with crabs, flounder, stingray, and an eel, at Weeks Bay NERR on eastern shore of Mobile Bay

Jubilee is the name used locally [1] for a natural phenomenon that occurs from time to time on the shores of Mobile Bay. During a jubilee, blue crabs, shrimp, flounder, stingrays, and eels swarm toward the shore in such numbers that the shallow water near land seems to boil with life. People living near the shore ring bells and call out to alert their neighbors so that everyone can rush down to the water with washtubs, gigs and nets, and gather a bountiful — and easily reaped — harvest of seafood.[1] As jubilees only happen on warm summer nights, often in the early pre-dawn hours, the event takes on the aspect of a joyous community beach party, with lights shining into the Bay water.

Although no one knows for certain what causes a jubilee, the prevailing scientific explanation is based on oxygen depletion (hypoxia), caused by decay of organic material settling on the bottom of the bay.[1] Hypoxia frequently leads to dead zone formation and fish kills in other parts of the world. This process is accelerated during the summer. Coupled with certain climatic conditions, this mechanism is believed to drive crabs, shrimp, and fish (particularly bottom-dwelling fish) toward the shore, in a desperate search for more oxygen-rich water.[1]

Although jubilees have been reported in other regions, Mobile Bay is perhaps the only body of water where this phenomenon occurs fairly regularly. Jubilees occur most often along the Bay's upper eastern shore, north from Great Point Clear to Fairhope and Daphne; however, jubilees also occasionally happen south of Point Clear near Mullet Point or on the western shore of Mobile Bay at Deer River and Dog River. [2]

Jubilees cannot be predicted with certainty. Local folklore offers some clues for telling when a jubilee might be in the offing:

Not all of these conditions must be present before a jubilee can occur, though, nor does the presence of all of them at once guarantee a jubilee. To the residents of Mobile Bay's eastern and western shores, the jubilee remains as a mysterious — and most welcomed — gift from nature and an important part of their food heritage.