Born to Lewis and Henrietta Bear on January 7, 1872, Max attended school in his native Greenville, Alabama and in Cincinnati, then attended the Staunton Military Academy in Virginia, graduating in 1888. He married the former Belle Rosenau on October 12, 1899.

Joining his father's firm, the Lewis Bear Company, as a traveling salesman, he quickly became a full partner. He was also president of the San Carlos Hotel, the Pensacola Crockery Company and the Ball Book & Novelty Company.

In 1906 Bear built a large home in East Hill, which later became known as the Scotland House.[1]

In 1914 Bear arranged to take a "joy ride" in an early airplane and said of the experience, "A man should not try to go up in an airship if he lets anything akin to fear possess him, for it is then one is really in danger. But I will have to confess that air traveling gives one a fine sensation."[2]

Elected to the Pensacola City Council in (date needed), he served as mayor from 1936 to 1937, following the removal of office of H. Clay Armstrong and the sudden death of his replacement, W. L. Moyer. (Bear had been the only Council member to oppose removing Armstrong from office for his support of Republican presidential candidate Alf Landon.).

Max was active in the Temple Beth-El congregation and served as its president for many years. He was chairman of the 1931 committee that planned construction of the new Temple atop Gage Hill, and the building's Max Bear Auditorium is named for him. 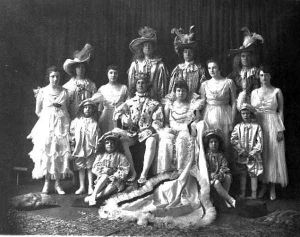 Bear was heavily involved with the Progress Club, the Pensacola Yacht Club the Elks Club and the Knights of Pythias. He was named King Priscus of the 1916 Mardi Gras celebration, the first Jew to be given the honor.

He passed away on January 3, 1956 and is buried at the Temple Beth-El Cemetery.