John Gorrie (1802–1855) was a physician, scientist, inventor, and humanitarian who is considered the father of refrigeration and air conditioning. He was born on the Island of Nevis to Scottish parents on October 3, 1802, and spent his childhood in South Carolina. He received his medical education at the College of Physicians and Surgeons of the Western District of New York in Fairfield, New York. In 1833, he moved to Apalachicola. As well as being resident physician at two hospitals, Gorrie was active in the community. At various times he served as a council member, Postmaster, President of the Bank of Pensacola's Apalachicola Branch, Secretary of the Masonic Lodge, and was one of the founding vestrymen of Trinity Episcopal Church.

Dr. Gorrie's medical research involved the study of tropical diseases. At the time the theory that bad air caused diseases was a prevalent hypothesis and based on this theory, he urged draining the swamps and the cooling of sickrooms.[1] For this he cooled rooms with ice in a basin suspended from the ceiling. Cool air, being heavier, flowed down across the patient and though an opening near the floor. Since ice had to be brought by boat from the northern lakes, Gorrie experimented with making artificial ice. 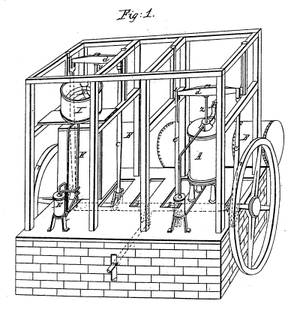 After 1845, he gave up his medical practice to pursue refrigeration projects. On May 6, 1851, Gorrie was granted Patent No. 8080 for a machine to make ice. The original model of this machine and the scientific articles he wrote are at the Smithsonian Institution. Impoverished, Gorrie sought to raise money to manufacture his machine, but the venture failed when his partner died. Humiliated by criticism, financially ruined, and his health broken, Gorrie died in seclusion on June 29, 1855. He is buried in Gorrie Square in Apalachicola.