John Allen Burt is an anti-abortion activist whose protests and associations with murderers Michael Griffin and Paul Hill attracted widespread attention and criticism. Burt operated Our Father's House, a Christian ministry and shelter for unwed mothers, and in 2003 he was arrested for molesting a 15-year-old girl in his custody. He was convicted on five charges and sentenced to 18 years in prison.

Born on March 26, 1938, Burt was a Marine and divorced father who battled alcoholism and speed addiction before becoming a born-again Christian. He was also a member of the Ku Klux Klan. Although later dissociating himself with the organization, he later remarked on its similarities to anti-abortion groups:

Burt and his wife Linda began their Christian street ministry in 1978. Their ministry and women's shelter, Our Father's House, was incorporated on December 30, 1981.[2] After reading in the Pensacola News Journal that the number of local abortions nearly matched the number of live births (a figure elevated by the fact that Pensacola had the only abortion clinics in the region[3]), Burt focused his ministry on stopping the practice. 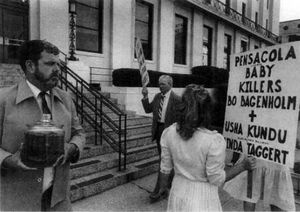 Burt, left, picketing the Goldsby/Simmons trial with "Baby Charlie" at the federal courthouse

In 1984, Matt Goldsby and Jimmy Simmons perpetrated a series of abortion clinic bombings. Burt, who called himself their "spiritual advisor," picketed their trial with other anti-abortion protesters in May 1985. He famously carried with him "Baby Charlie," which he claimed was an preserved 4-month-old fetus, often in a glass jar or wrapped in a blanket. Asked about his responsibility in influencing the bombers, Burt said at the time, "We're in a battle between good and evil. I can't help it if what I do inspired someone to go off the deep end."[4] He was also arrested in February of that year for trespassing in the clinic of Dr. Bo Bagenholm (whose office had been destroyed in the bombings) and was sentenced to five months' probation on August 29.

On March 26, 1986, Burt and five others (including his daughter) invaded the Ladies Center, damaging equipment and injuring two women. According to a Pensacola Police Department spokesman, "It looked like a hurricane had gone through that building."[5] He was convicted of burglary and assault.

John Brockhoeft was arrested after leaving Burt's house on May 6, 1988 with possession of bomb-making materials and the intent to blow up the Ladies Center. Burt denied knowledge of Brockhoeft's plans, but was sentenced to two years' house arrest.

When Michael Griffin shot and killed Dr. David Gunn outside the Women's Medical Services on March 10, 1993, Burt was accused by defense attorney Bob Kerrigan of brainwashing Griffin with graphic anti-abortion propaganda to the point of a "nervous breakdown" which led to the murder.[1] Burt was sued in a civil lawsuit that was settled on July 3, 1996, with Gunn's family taking possession of land adjacent to the Ladies Center that Burt had purchased in 1991 to protest the clinic without violating obstruction laws.

On February 26, 1994, during the Griffin trial, Houston anti-abortion activist Daniel Ware arrived in Pensacola and notified Burt of his plans to mount a suicide assault against a group of abortion providers who were in town for a memorial to David Gunn. Burt sent him back to Houston and notified the authorities, who arrested Ware on weapons charges. Burt was shunned by some anti-abortion groups after this incident.[3]

Burt was also a known associate of Paul Hill, who murdered Dr. John Britton and his bodyguard James Barrett on July 29, 1994.

Burt was arrested at the Community Healthcare Center of Pensacola on February 23, 2001 for disorderly conduct, resisting arrest without violence and violating a noise ordinance. Burt reportedly shouted to a black couple leaving the building, "This place has killed more than the Ku Klux Klan did."[6] He was later sentenced to six months' probation and ordered not to come near the clinic.

In 2003, Burt was accused of sexually molesting a 15-year-old girl staying at Our Father's House, his shelter for troubled teenage girls and unwed mothers. He went missing on June 5, after an altercation with the girl during which he fell on her. Family members feared for his health, claiming his diabetes left him prone to "mini-strokes." He was apprehended 150 miles away on June 10, when state troopers spotted his green van at the Chattahoochee Rest Area off Interstate 10 in Gadsden County.[7] He had apparently attempted suicide, slashing his left wrist with a razor in a hotel room.[8] 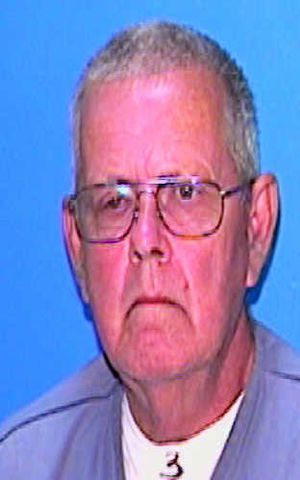 In her testimony, the girl claimed Burt began molesting her within weeks of her arrival at Our Father's House. She filed a police report, but, like previous allegations made from other girls staying at the shelter, it was dismissed for lack of evidence. On the evening of June 5, Burt was groping her in the shelter kitchen when another resident entered the room. He left, but showed her a note through the kitchen window propositioning oral sex and sexual intercourse in graphic terms. She signaled for him to come inside, at which point she grabbed the note. He tackled her trying to retrieve it, and she cried for help. When others arrived, Burt fled in his van.[10]

A handwriting sample confirmed the note was written by Burt, who claimed it was intended for his wife before the accuser took it. "They've smeared my name. They've ruined my ministry and just about bankrupted us," he said. "I treated [those girls] like my own children."[11]

On April 1, 2004, a six-person jury found Burt guilty on all five counts.[12] On May 12 he was sentenced by Circuit Court Judge Ron Swanson to 18 years in prison.[13] Attempts to appeal were rejected by higher courts, which unanimously upheld the conviction.