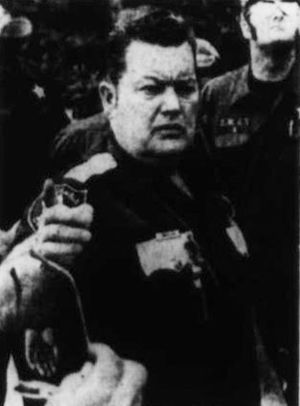 Jim Edson was a high-ranking Escambia County sheriff's deputy during the administration of Royal Untreiner who was removed from the department[citation needed] after a series of scandals.

Edson was promoted to lieutenant by Sheriff Untreiner and was later made chief of the riot control squad. He was in charge of crowd control during the series of demonstrations of February 1975, where hundreds of African-Americans protested the killing of Wendel Blackwell by Deputy Doug Raines.

Reporters present at the demonstration recalled several racist statements Edson made to the protestors. One black boy had carried a sign that read, "Wendell Blackwell: gone, but not forgotten," to which Edson reportedly said, "Boy, you carrying the wrong sign. I forgot the nigger the next day." At one daytime demonstration, Edson told St. Petersburg Times reporter Jane Daugherty that if the protestors returned that evening, the deputies would play a game called "Selma" in which "you grab a club and hit a nigger. … Now, I don't want you to think I'm a racist. I like black folks. In fact, I'd like to have two of them — to put in my backyard for the dogs to play with. Niggers are better than milkbones."

Reverends H. K. Matthews and B. J. Brooks were among the 47 people arrested at a February 24, 1975 demonstration. The two men were charged with felony extortion for allegedly threatening to "assassinate" Untreiner and Raines in a group chant. (The black participants maintained that the chant said "incarcerate.") Edson was the prosecution's main witness during their trial, and he testified that Matthews and the group tore down barricades, brandished weapons and made explicit threats of violence against the officers. As Matthews later recounted,

The laughable aspect of that scene is the deputies arrested no one for these alleged actions. Edson claimed he ordered no arrests because he did not "want to try and provoke the situation." … The whole scene is ludicrous, but Edson swore under oat that this is what happened at his jailhouse. … The more he talked, the more outrageous his lies became.[1]

Matthews and Brooks were found guilty of extortion by an all-white jury, though the convictions were eventually overturned.

Edson was also riot chief during the Escambia High School riots of 1976.

In 1978,[date uncertain] Pensacola News Journal reporter Mark O'Brien discovered that Edson's college transcript from American University, which showed the two years of college credit required for Edson's promotion to riot squad chief, actually belonged to Edson's son and had been doctored, bearing the notary seal of a secretary who worked at the sheriff's office. After initially dismissing the scandal as having been engineered by the department's critics, Sheriff Untreiner later suspended Edson for 30 days and demoted him to motorcycle cop.