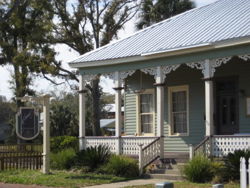 Jamie's Restaurant was an upscale restaurant in the Seville Square Historic District that specialized in French cuisine. It was located at 424 East Zaragoza Street, in an 1879 cottage with a maximum seating capacity of 55. Originally the Seville Sweetshop, it became a full-service restaurant and was renamed for owner Jamie Kirkland in 1981. Ray & Nell Redish purchased the restaurant from Kirkland and expanded the concept to fine dining. Among the original staff were headwaiter Gary Serafin and busboy Russell Scarritt, both of whom would eventually become owners! Under chef Libbey Dasher and assistant Missy Hy, the restaurant garnered numerous awards. Serafin bought Dasher out and became a chef in is own right, with his talent & efforts bringing fine cuisine & ambiance to the area. Under Serafin's watch Jamie's French Restaurant was the first in the region to receive awards from Wine Spectator & Florida Trend Magazine. Russell & Linda Scarritt purchased the restaurant from Serafin on New Year's Eve, December 1999.

Throughout the years Jamie's recipes were published in magazines, cookbooks and regional books of interest. In 2007 their famous lemon icebox pie was featured on the cover of Bon Appétit magazine.[1]