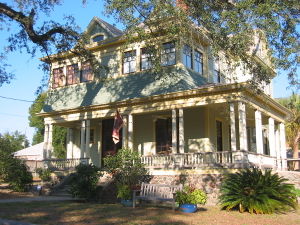 The Hopkins' House was a North Hill restaurant and former boarding house, founded in 1949 by Arkie "Ma" Hopkins, that served Southern cuisine to patrons seated at large communal tables. Owner Ed Hopkins closed in 2004 while seeking a buyer, but none were found before his death later that year. 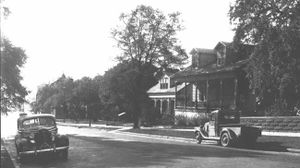 Arkie Hopkins's cooking was well-known among friends and family before she entered the food service business. Her brother-in-law Elbert Wesley Hopkins, Sr., who previously operated a boarding house of his own, opened Hoppy's Sundry Shop at 410 North Palafox Street around 1946. They sold plate lunches cooked by Arkie for fifty-nine cents to switchboard operators at the nearby telephone exchange.[1]

Inspired by the success of the Hoppy's venture, Arkie began her own boarding house in February 1949. She rented a building across the street at 415 North Palafox Street, between Belmont and LaRua Streets, renting the upstairs rooms and setting up the restaurant downstairs. In November 1951 she purchased her own building, the McGaughy House at 900 North Spring Street, and moved the business there. Arkie fell ill in 1954, and her sister Blanche Stubbs ran the business for 17 years.[2]

Over the years, Hopkins' House was frequented by a number of celebrities diners, including singers Michael and Janet Jackson, boxer Sugar Ray Leonard and Miss America 1965 Vonda Kay Van Dyke, who made repeated visits with her husband.[2]

After the 1986 death of Ma Hopkins, her son Ed took over the business. The business thrived for the next ten years being run by Vicki Hopkins(Ed's wife). After their divorce, losing money and balancing the duties of his law practice, he decided to close the restaurant in February 2004 to seek a new owner. He convinced long-time head cook Cora Edwards to come out of retirement and train the eventual buyers, but none were found.[3]

Ed Hopkins died on a hunting trip with his son on September 11, 2004, days before Hurricane Ivan ravaged the city.[4] Realtor John Carr nearly arranged a sale to restaurateurs Samantha Martin and André Neyrey, but permitting problems forced them to withdraw their offer.[5] The house was purchased for $340,000 on July 5, 2005 by Elise and Don Gordon, who turned it into a private residence and auctioned its contents.[6] There are no plans to reopen the restaurant at a new location.

In late April 2008, the Gordons opened the house for public tours for one weekend as part of the Historic North Hill Preservation Association's spring 2008 tour. For a fee, they offered a tour of the home, as well as a fried chicken dinner with two sides.

Hopkins' House was known for its fried chicken — complete with "pully-bones" — which was the main entrée four days a week. A variety of other dishes were served, many of which have been included in regional cookbooks, including the Junior League of Pensacola's Some Like It South.

In its final years, the Hopkins' House was served breakfast and lunch Tuesday through Sunday. Dinner was served Tuesday through Friday in 1999,[7] but by 2004 it had been reduced to Tuesday and Friday nights only. The final prices were $7.95 for lunch or dinner and $5.50 for breakfast.[8]