Hopjacks Pizza Kitchen & Taproom is a restaurant and bar located at 10 Palafox Place. It was opened in early 2008 by owner Joe Abston. In January of 2010 it was named one of the country's "Best Beer Bars" by Draft Magazine.

Development of Hopjacks was announced in 2007 after Mexican eatery Margarita's vacated its location at 10 South Palafox.[1] The restaurant and its adjacent space, formerly occupied by The Pillars, were merged and renovated by Bounds Architectural Studio and contractors George Keen and David Rhodes. 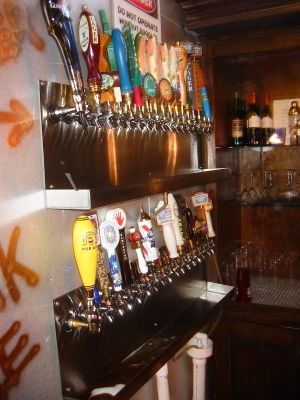 Hopjacks in Pensacola, FL. boasts 112 different beers on tap with more than 120+ bottled selections, ranging in price from around $2.50 to as high as $9.75 for specialty beers. Hopjacks is notorious for it's ever evolving beer menu due in part to their purchasing power and professional relationships with breweries across the country. It is not uncommon for them to have "one-off" products drop-shipped and made available to their clientele. Due to these reasons they update their beer menu once a week to make sure everything is current.

Daily specials include Mega-Mondays (half-off any 16" pizza, dine-in only), $1 Off American Craft Bottles/Cans Wednesdays, Adult Swim Thursdays ($3 Sweet Water Brewing core brands; 1/2 off any martini, Belgian Fries and Sweet Potato Fries), their (in)famous 3 Dolla Holla Tuesdays (practically everything behind the bar is $3, some items $4, some get no discount) and the incredible draft deal of Sucker-free Sundays (ALL draft selections are half off).

Hopjacks opened their third store on 204 E Nine Mile Road on the north side of town on December 5th, 2011. Hopjacks third location boasts 85 beers on tap and of course 100+ bottled features.

Starting May 5th, 2010 - Hopjacks has a featured Beer Column in the Pensacola News Journal. It is released every Wednesday in the Food & Wine Section of the paper.