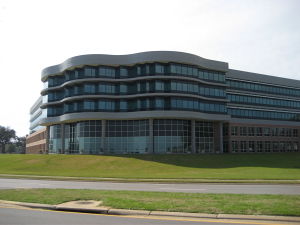 The Gulf Power Building is a five-story, 250,000 square foot office building at One Energy Place (500 Bayfront Parkway) that serves as the main corporate headquarters for the Gulf Power Company, which serves customers across Northwest Florida from the Perdido River to the Apalachicola River. More than 400 employees work in the building, adding to the economic vitality of downtown Pensacola.

The company's offices were formerly located in a multi-story building constructed in the 1950s on Pace Boulevard just north of the intersection of Garden Street/Navy Boulevard.

The new building was constructed in two sections between July 1985 and March 1987. The Gulf Power investment was placed in an economically depressed area of the city and since its construction, the neighborhood has been transformed with two new parks (Veteran's Memorial Park and the Missing Childrens' Memorial) an upscale residential community (Aragon) and new restaurants.

Before construction began, Gulf Power worked with a team of UWF archaeologists to excavate the site for historical purposes. The team, led by Dr.Judy Bense, unearthed a wealth of artifacts from a Native American culture (dubbed "Deptford") that date back to around 150 CE. The project was awarded a U.S. Department of Interior award for public/private partnership to help preserve historic sites.

A restaurant -- "Three Sisters" -- operates a restaurant open to the public on the first floor of the building.