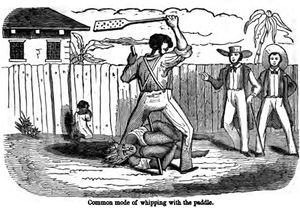 Engraving of the jailer whipping a prisoner, from the Trial and Imprisonment of Jonathan Walker

Francisco Touart was the jailer of the old city calabozo during the imprisonment of Jonathan Walker. In his memoir, Walker described Touart (mistakenly as Francis Torward, or "F.T.") as living on the second floor of the jail with his wife ("L.T.") and their six children. There was also a slave woman and her child, and Walker repeatedly describes how the couple "whipped the cook," city slaves sent to be punished, and other prisoners whose incarcerations overlapped his own.

Touart was the great-great-grandfather of Escambia County Administrator George Touart.[1]