The building was commissioned by First National Bank president William H. Knowles. The bank's previous president, Francis Celestino Brent, had planned to build a nine-story office tower for the bank, but the Brent and Blount Buildings constructed after the Halloween Night Fire of 1905 more than satisfied the city's need for office space, so the tower plans were scrapped. 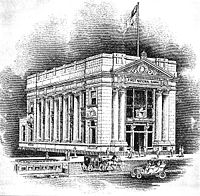 Rendering of the First National Bank

The bank was ready for occupancy on May 23, 1908. A year later, Bankers Magazine described the building in detail:

The exterior is of pure white marble, a material which sets off wonderfully well its classic lines, and rests upon a base of dark granite. Along the sides of the building and on either side of the entrance are a number of Ionic columns which support the pediment and the portico, and these add to the general air of dignity and beauty. Modern methods of construction and the modern building materials used have made the First National's home absolutely fire-proof, and it will stand for many years to come as one of Pensacola's finest structures. … Pressing through the great entrance doors we enter the main banking chamber. The well-lighted room has a clear ceiling height of over thirty-five feet, and its walls are frescoed in a delicate shade of cream and old ivory, a coloring which harmonizes perfectly with the rick Italian marble counters and wainscoting. The metal counter screen is of solid statuary bronze of the United States standard alloy and a fine example of the metal worker's art. Passing down the long public aisle we come to the space devoted to the president's and directors' rooms. Here also is the entrance to the safe deposit vault, which is closed by a door seven feet in diameter, weighing fifteen tons, and twelve inches in thickness, fitted with time locks of the latest pattern. Withint the vault there are several hundred safe deposit boxes and storage closets. The bank also has separate book vaults for the storage of its many books and papers. Coming out of the vault we pass on to the president's room, which is tastefully furnished in mahogany of the finest quality and workmanship. The directors' room, adjoining that used by the president, is also finished in mahogany, but with its massive table and fireplace it is easily the handsomest room in the building. There are separate writing and waiting rooms for depositors, and these have many conveniences which the customers have learned to appreciate. At the end of the room, and high above the working space and officers' quarters, there is a large art window of leaded glass, which fittingly represents Pensacola as a seaport. This window is divided into three openings, the central and largest opening containing a life-sized figure of Commerce, seated on a throne lapped by the constant and never-ceasing waves of the ocean. In her right hand she holds the wand of Mercury, the ancient Greek symbol of speed. In her left hand is the horn of plenty, symbol of prosperity, and at her feet a branch of palms, symbol of peace.

The foundation is of polished Maine granite, while the structure is of white Georgia marble. The material for the cabinet work is imported mahogany of the finest grades from East India, San Domingo and Central America, and the marble used in the counters and wainscoting is from the Sienna quarries of Italy. The style of architecture is the pure Greek basilica, one of the most beautiful types of Grecian art.

After the First National Bank was forced to close in 1914, it was occupied briefly by the National Bank of Commerce until being acquired by the Citizens and Peoples National Bank (C&P) in 1918. Several additions and renovations were made over the years.

Following a series of mergers, C&P Bank was absorbed into Barnett Banks of Florida in 1993. The building was purchased by Escambia County in (date needed).