Frederick Aldine "Dean" Baird, Jr. (b. 1941) is a real estate developer and businessman who developed the Quietwater Beach Boardwalk on Pensacola Beach in 1985. Nicknamed "Capt'n Fun" for his partying lifestyle, he is the namesake of the Capt'n Fun Beach Club on the Boardwalk, which his sister June Guerra opened in 1986. "Capt'n Fun" was also the name of Baird's racing boat. 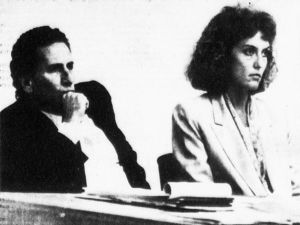 Baird and attorney Laura Keene at his 1987 trial

In late 1986, the Florida Department of Law Enforcement launched an undercover investigation into an illegal sports betting ring that resulted in the arrests of Baird and three others — Dickie Merritt, Joseph Nunnari and Douglas Vickery. Prosecutors claimed that Baird had operated the betting ring since 1981, accepting bets on college and professional football games that amounted to $6 million annually, and likened the operation to "organized crime." On August 21, 1987, a jury found Baird guilty of one conspiracy and two racketeering counts.[1]

The conviction was appealed and overturned by a district court, on the basis that an agent's testimony was hearsay and therefore inadmissible as evidence, but the Florida Supreme Court quashed the latter decision and upheld the conviction.[2]