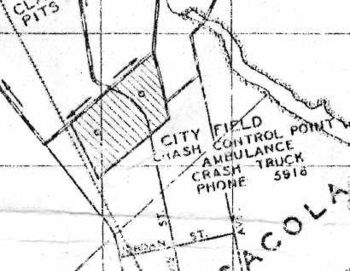 1939 map. Davis Street bisects the field. Jordan Street is marked to the south. The area north of the field is marked "Clay Pits".

The field was granted to the Navy by the Escambia County Commission in 1922 under a no-cost, five-year lease. The Navy named the field in honour of Lieutenant Commander William M. Corry. In 1927, at the end of the lease period, the Navy determined the field to be too small, and acquired a new site from Escambia County, located about three miles north of NAS Pensacola. Thereafter the Corry Field name shifted to that facility, and the original field entered use as an outlying landing field under the name "City Field". The Navy continued to use the field until the early 1940s, after which time residential and commercial development overtook it.

The field's approximate location has been overlaid on a present-day map below: