The Brent Building is a three-story retail and office building located on the west side of Palafox Place, between Garden and Romana Streets. It was commissioned by Francis Celestino Brent in 1905 after the Halloween Night Fire destroyed several earlier structures, including one recently built for Brent. Construction was concurrent with the adjacent Blount Building and was completed in 1906. 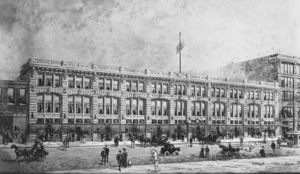 Hawley's 1905 rendering of the Brent Building

Within weeks of the Halloween Night Fire, Brent had commissioned renderings from architect Higdon Hawley. M. T. Lewman was hired as the general contractor. Work progressed quickly, and a March 25, 1906 article in the Pensacola Journal predicted the building would be ready for lease by May. In fact, Brent received the keys on July 30, and an open house was held on August 1.

A newspaper article described the completed building in detail:

The Brent building has a frontage of 240 feet on Palafox Street and the main building extends back to a depth of 120 feet to a rear street. There are ten stores in the first story and a marble entrance in which there will be a cigar and news-stand, back of which is the elevator, and at the rear of the elevator, a barber shop. The second and third story each has room for 84 offices, provided with all modern conveniences and equipment. … The main building is therefore about the size of the average office building, and by far of course the largest building in Pensacola and probably equal in size to any in the state. The ten stores referred to are each lighted from the front and the rear and from a skylight in the center, which all conduces to ventilation as well as light. Each store is equipped with steam heat, electric lights and gas. The show windows are on a separate electrical circuit, which is controlled from the electric light company's works and are so arranged that the show window lights can be turned off from the light company's station at will. … The elevator entrance to the building is exceptionally handsome. It is paved with marble and the walls are lined with polished marble throughout the vestibule. … All of the offices are finished in oak, with connecting doors between offices, so that they may be arranged in suites, where desired, to suit the convenience of the tenants. … In the construction of the concrete, some of the gravel is from European countries and also from South America and elsewhere, coming here as ballast in vessels. The steel for the structural parts of the hosue was made of iron ore from the mines in Pennsylvania, manufactured into billets and shipped in this form to the steel rolling mills in New Jersey where it was rolled into the shapes required and then shipped by vessel to this place for use in the new building. The stone was taken from the quarries in Indiana, shipped here in the blocks, and cut to the required form before being set in the building. The marble is principally from Tennessee, some of it, however, being imported Italian, while the oak which constitutes the principal trim and finish of the building is from the forests of the north, being worked into shape and manufactured into doors, trim, etc. The plastering throughout the building was manufactured from gypsum rock of Kansas, the cement is from Germany, Pennsylvania, New jersey, etc., and the building glass fronts were made at the glass works of Indiana by the natural gas process, which form of manufacture produces a clearer and denser article, of which it is claimed it will not sweat from frost or other causes. The hardware was all made to special order in Connecticut, and in a general way one realizes what the assembling of the materials for structure of this kind involves, securing it literally "from all points of the compass." … There are from 400 to 500 tons of steel used, or about 13 car loads; 6,000 to 8,000 barrels of cement, or about 80 cars; and about four cars of re-inforced bars. … The construction of the building is so arranged that whenever requirements justify it, an addition of one or two stories may be added to the building without inconveniencing any tenant. Altogether this structure is one which is a credit to both the owner and the city, and which marks in no small degree the era of progress and development which has taken hold of the Deep Water City of the gulf. 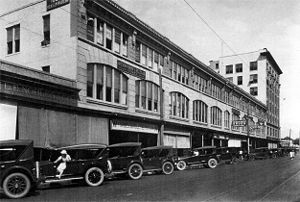 View of the Brent Building from the south