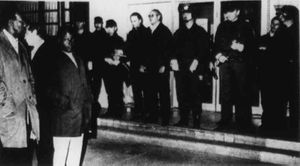 A series of demonstrations protesting the killing of black motorist Wendel Blackwell by Deputy Doug Raines took place on the grounds of the Escambia County Sheriff's Office in February 1975.

Blackwell had been shot in the head and killed by Raines on December 20, 1974. It was deemed a justifiable homicide by officials, because Blackwell had apparently possessed a firearm, but members of the black community wanted Sheriff Royal Untreiner to suspend Raines pending a full investigation. When Untreiner refused, several local civil rights leaders, including B. J. Brooks of the NAACP and H. K. Matthews and Otha Leverette of the Southern Christian Leadership Conference, organized demonstrations in downtown Pensacola, boycotted local stores, and met with Governor Reubin Askew to discuss the situation. Nightly protests held at the Sheriff's Department on Leonard and E Streets grew in intensity over the course of three weeks.

On February 24, a crowd of nearly 500 gathered outside the Sheriff's headquarters and began repeating protest chants. Rev. Jimmie Lee Savage reportedly led demonstrators in the chant, "Two, four, six, eight, who shall we incarcerate? Untreiner, Raines, the whole damn bunch!"

Sheriff Untreiner, hearing protesters chanting the word "assassinate" instead of "incarcerate," ordered the crowd to disband. When they did not leave the premises immediately, he sent seventy deputies with nightclubs into their midst around 10:08 p.m..

In the ensuing 15-minute confrontation, thirty-four adults (including Matthews, Brooks and Leverette) and thirteen juveniles were arrested on misdemeanor charges of unlawful assembly and malicious trespass. Deputies confiscated an assortment of weapons from the protesters, including six clubs and three knives. At least one demonstrator was injured: a youth who was struck on the head when he allegedly advanced on an officer. Matthews said of the fray, "We don't mind being arrested. We expected that. But what we didn't expect was this blatant brutality. It's ridiculous."[1]

Three days later, felony extortion counts were added to the Matthews and Brooks charges, due to the alleged "assassinate" chant. During their trial, audio tapes recorded by deputies that evening showed that Rev. Savage had called out "incarcerate" in leading the chant, but that several protesters had responded "assassinate." Prosecuting attorney Barry Baroset said in his closing statements, "I maintain that the defendants used the crowd as a weapon, just as though they were using a pistol."[2]

Matthews and Brooks were found guilty by an all-white jury on June 10, 1975. Matthews was quoted afterward to say, "That's the penalty you pay for being black in this community."[2] He was sentenced to five years' hard labor, but received clemency after 63 days. He left the Pensacola area in 1977 and received a full pardon in 1979.